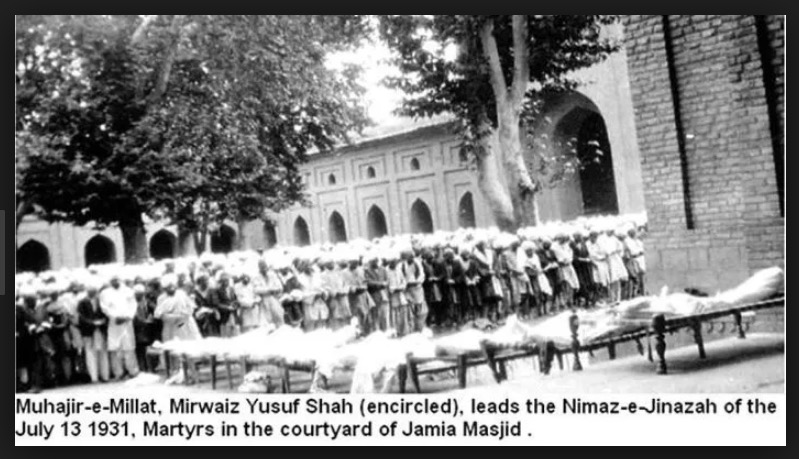 Kashmiris on both sides of the Line of Control, in Pakistan and the world over are observing the Martyrs’ Day, today, to pay homage to the martyrs of July 13, 1931 and all other Kashmiri martyrs.

According to Kashmir Media Service, complete shutdown marked by strict restrictions by the Indian authorities is also being observed in Indian illegally occupied Jammu and Kashmir.

Stringent measures have been taken to prevent a march towards the Martyrs’ Graveyard at Naqshband Sahib in Srinagar where the martyrs of July 13 are buried. Posters with pro-freedom and pro-martyrs slogans were displayed in Srinagar and other parts of the territory.

Call for observance of the day has been given by the All Parties Hurriyat Conference and Mirwaiz led Hurriyat forum while it was supported by all pro-freedom leaders and organizations to deliver a strong message to the world that the people of Jammu and Kashmir believed in peaceful resolution of the Kashmir dispute under United Nations resolutions and were not ready to accept India’s illegal occupation, come what may.

Indian police and agencies were preparing lists of the business community members and shopkeepers who were observing the shutdown in memory of the 22 Kashmiri martyrs who were shot dead by the Dogra troops in Srinagar on this day in 1931.

The forces were also asking for names of people walking on Lal Chowk and adjoining areas.

Hurriyat delegations including one led by Javed Ahmad Mir visited the Martyrs’ Graveyard and offered Fateha for the departed souls.

Rallies and seminars were being held in Azad Kashmir, Pakistan and all major capitals and major cities of the world including London and New York to pay tributes to the martyrs.

It was on the 13th of July 1931 when the troops of Dogra Ruler had killed 22 Kashmiris, one after another, outside Central Jail in Srinagar during the court proceedings against one Abdul Qadeer who had asked Kashmiri people to defy the despotic Dogra rule.

It was time for Namaz-e-Zuhr when a young man started Azaan but was shot dead by the Hindu ruler. 22 youth sacrificed their lives till the completion of Azaan.