The Flying Man a continuum in the scholastic tradition

* While the internal, doctrinal and theological substance of Islam forms an essential part, it is more the relational and consanguinity aspect vis a vis the modern world 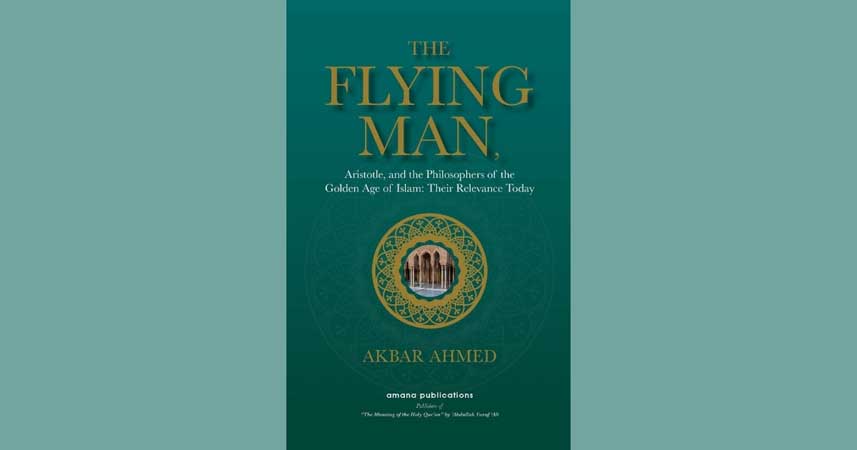 The Flying Man: The Golden Age of Islam: Its Relevance Today is a book written by Dr Akbar Ahmed, described by BBC as the “world’s leading authority on contemporary Islam”, holding the Ibn Khaldun Chair of Islamic Studies at the American University, Washington, DC.

The text may be aptly described as a continuum in the scholastic tradition that the author can be rightly proud of in initiating and promoting the placement and understanding of Islam in its historical and existential modern day context and proper perspective.

While the internal, doctrinal, theological substance of Islam forms an essential part, it is more the relational and consanguinity aspect vis a vis the modern world, more particularly its place in relation to collective human thought and other present religions, that the author strives to highlight in this as well as his other valuable books.

It is a simultaneously a continuation of the moral endeavour to correct and dispel the rather facile and distortionary impression given out by certain quarters of Islam being a retrograde and moribund phenomenon that has nothing valuable to contribute to human thought and knowledge. That somehow Islam and its believers stand in contradistinction to human values of inviolability of human life, freedom, pursuit of knowledge, respect for law and established political structures.

The golden age of Islamic scholarship that further developed and promoted human thought in all its myriad dimensions, becoming the intellectual inheritance infusing modern western civilisation and forming the basis of a tolerant and humane cultural milieu, categorically falsifies such tenuous conjectures.

On a different plane the book untangles the apparent riddle that scholarship confronts when the Middle Ages from about 500-1400 AD, viewed from the western perspective, appear as the dark ages, but that contemporaneous with this period one notices an era in the Islamic world of profuse, basal contributions in various fields of knowledge and thought giving rise to a glorious Islamic civilisation.

There was hardly any area of reflection, be it philosophy, mathematics, algebra and algorithm, astronomy and medicine or optics, in which rich and elemental contributions were not made.

The translations into Latin of their works provided the essential bridge between classicalism and renaissance.

There are many more luminaries, Muslim, Jews, Christians and sabiens of the golden age of Islam who participated in a mutually collaborative and intellectually tolerant period of enlightenment without considerations of creed, race or colour.

Without taking into account this golden period of Islam, the story of the rise, subsequently, of the western civilisation remains incomplete and unexplained. In historical perspective the west – Muslim relationship is generally viewed in an adversarial context harking back to the crusades and other combats while papering over the contributions of Islamic thought to modernity.

This is part of the problem of lack of inter-faith harmony and tolerance which can lend itself to improvement through better education and understanding.

Was the golden period a mere preservation and transmittal of antiquity to post medieval Europe? Did the golden age of Islam make any significant contributions to human thought and knowledge? There is no doubt whatsoever that Islamic made profound accretions to the store of human aufklarung and enlightenment. It was thinkers like Avicenna, Averroes and Al Ghazali who resolved the apparent antithesis between reason and revelation, Aristotelian philosophy and religion by showing that the divine was inherently rational; that Prophethood represented the most profound manifestation of the highest form of philosophic cogency coupled with virtue and wisdom.

This along with other insights proved to be a cornerstone for the Christian theological corpus grounded upon the watershed work of St Thomas Aquinas who frequently refers to Averroes, in his Suma Theologica, respectfully as “the Commentator”.

The Aristotelian idea of the indivisibility of body and soul had posed philosophical and theological difficulties for the concept of the hereafter and the subsistence of the soul after human corporal extinction.

Avicenna’s Flying Man or Floating Man mental experiment led to proving the perception of the division between matter and mind, body and soul. Besides its intrinsic value on its own, the idea led to confirming the belief in the soul living in the hereafter after the death of a person. Avicenna’s Flying Man experiment in a way also presages by nearly 600 years Rene Descarte’s cogito ergo sum dictum to prove self-existence through innate, conscious, self-doubt.

Viewed from the Hegelian standpoint the author’s book postulates a dialectic, as it were, between the past and present, a past in which Islam played a major role in the refinement and transmission of Greek and Indian corpus of knowledge to later times, upon which Europe built an edifice of flowering of human thought in all its myriad dimensions.

Viewed in retrospect it may be viewed as a historical phenomenon which ushered in a synthesis that materialised into a European renaissance, later seeding formidable roots towards the emergence of enlightenment and science.

On another plane there appears a prescriptive analogue to Hegelianism in the growth of various poles of present day religious and social intolerance. These take their compass, unfortunately, from mistaken perception of the extreme fringes present in any religion or ideology as representative of their vastly tolerant and humane cores of their belief systems. This phenomenon is peculiarly stark among the belief systems of the three Abrahamic religions.

Through mutual understanding of the common value and normative foundation of these religions, coupled with well-directed educational and cultural inter actions, there should evolve an elevated synthesis of mutual respect and reverence between the three main religions of this tradition ie Christianity, Judaism and Islam. With globalisation, informational connectivity and movement of populations across borders an Andalusian, convivencia-like inter communal coexistence partaking from and based upon understanding and respect for shared beliefs and values, a unity in diversity, is the need of the hour. The shared human predicament facing the current worldwide epidemic of COVID which does not distinguish between rich or poor, race or creed, should in itself be a sobering lesson that humans share similar threats and dangers which demand greater levels of dialogue, empathy and respect for the common humanity.

The article has been written and contributed by Sahibzada Riaz Noor who is the former chief secretary of Khyber Pakhtunkhwa. He is the author of The Dragonfly & Other Poems and Bibi Mubarika & Babur and is based in Peshawar. He can be reached at s.riaz.noor@gmail.com