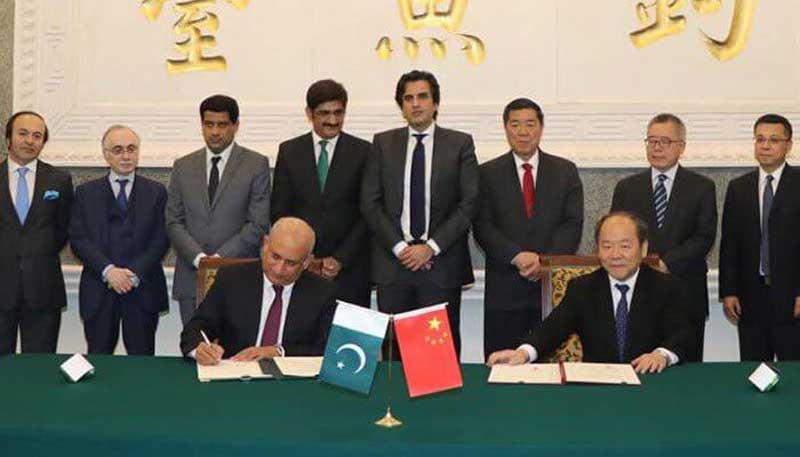 China and Pakistan are expected to sign a framework agreement for Industrial Cooperation (IC) during the 10th Joint Cooperation Committee (JCC) meeting on China-Pakistan Economic Corridor (CPECT), scheduled to be held via video-link this month.

Both countries have already signed an MOU on industrial cooperation and now in the upcoming meeting of JCC, it is likely to be taken to the next level, China Economic Net (CEN) reported on Monday.

The JCC secretariats are established in the National Development and Reform Commission (NDRC) of China and Ministry of Planning, Development and Reforms of Pakistan respectively. The two secretariats are responsible for communicating and coordinating with the line ministries, related to the projects of CPEC. Until now, JCC has convened nine meetings and since 2015 it is held on an annual basis. In connection with the 10th JCC meeting, KPK has proposed mega-projects of Khyber Pakhtunkhwa in energy and power, tourism, agriculture, road, industry and social sectors to be presented to the 10th JCC meeting for consideration.

It was informed on this occasion that all the necessary arrangements had been completed for the groundbreaking of Rashakai Economic Zone under CPEC, and so far 700 applications have been received for setting up industries in the economic zone.

A CPEC major project ML-I is also likely to see the light of the day in the 10th JCC meeting. Meanwhile, as many as 18 projects worth around Rs.83 billion, have been identified in the agriculture sector under the CPEC project to exploit its potential and modernize it for sustainable economic growth.

These projects are likely to be tabled in the 10th JCC meeting. About twelve short, medium and long-term projects identified by the China-Pakistan Joint Working Groups (JWG) are related to Livestock Wing, Ministry of National Food Security and Research (MNFS&R) and Livestock and Dairy Development Department, six projects are related to research and development to be executed by Pakistan Agricultural Research Council while one project has been identified for the establishment of Aquaculture Park in Coastal Areas of Pakistan.