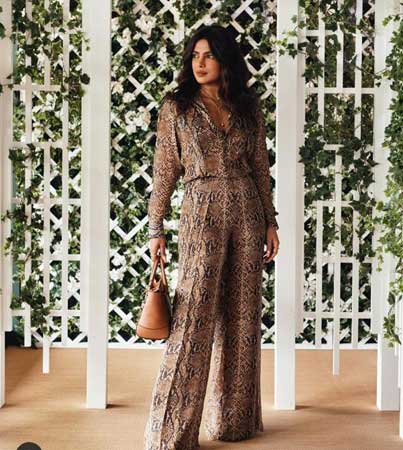 Bollywood actress Priyanka Chopra never fails to impress her fans with her mere presence and great fashion sense as recently she was spotted attending the Wimbledon Women’s Singles finals 2021 between Ashleigh Barty and Karolina Pliskova.

Not only that, the actor also attended the Men’s Singles finals between Novak Djokovic and Matteo Berrettini on Sunday.

She attended the game with socialite Natasha Poonawalla and James G Boulter.

Sharing the pictures on her Instagram handle, she wrote, “An amazing weekend at @wimbledon. Congratulations to @ashbarty and @djokernole on your incredible matches and victories. And a special thank you to Chairman of the All England Club, Ian Hewitt, and @ralphlauren for having me as your guest.

Many of her fans on Twitter posted videos and pictures of the global sensation and drooled over her perfect outfit.

Stationed in London now, she seems to be enjoying the best time of her life. On Thursday night, the stunning actress took to her Instagram to share pictures of her all-white boss lady ensemble and glimpses of her exploring the beautiful city with her friends.

The global star will be seen in spy thriller series ‘Citadel’, rom-com ‘Text for You’ and ‘Matrix 4’. Priyanka will also feature in an Indian wedding comedy, which she co-produces with Mindy Kaling.