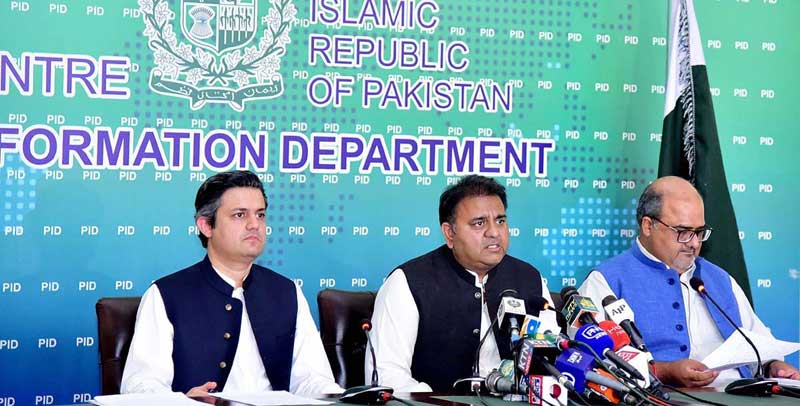 Advisor to the Prime Minister on Accountability and Interior Shahzad Akbar on Monday said Leader of Opposition in National Assembly Shehbaz Sharif will not be allowed to flee abroad, as he will have to answer for his misdeeds and ‘whopping’ corruption committed while in the government.

“Shehbaz Sharif is facing very serious charges of corruption… with strong evidence presented before the court,” he said. “Don’t try to escape to London. No matter how much you [Shehbaz] try, the government will not let you leave the country,” he warned while addressing a press conference along with Minister for Information and Broadcasting Chaudhry Fawad Hussain and Minister for Energy Hammad Azhar.

He said the corrupt elements are resourceful persons, who are deeply entrenched in the system. He said the Federal Investigation Agency (FIA) is conducting investigations against Shehbaz Sharif in the Rs 25 billion money laundering case. He said the assets of Shahbaz Sharif and his family members increased by Rs 7 billion in a short span of time. “About 96 percent transactions in this regard were carried out through telegraphic transfers (TTs) mostly through their lower level staff. Even a deceased staffer was not spared, whose account was used after his death. The accounts of Ramzan and Al Arabia sugar mills were also used for the purpose,” he added.

Shahzad Akbar said no investigator had harassed Shehbaz Sharif. Rather his son Hamza Shehbaz, who did not answer even a single question about his corruption, had threatened the FIA officers during the course if investigations saying that the the time keeps changing, he added.

Shehbaz, he said, has in fact become ‘sentimental’ as he was not allowed to go abroad. “He got angry whenever the investigators asked questions about his corruption. He has adopted a strategy of counter attacking the institutions as his party already has the history of invading Supreme Court,” he added.

Shehbaz was summoned by the FIA for investigations on June 22 and he levelled harassment charges in July, which was quite surprising, he said. “There is no possibility of harassment as the FIA has a transparent investigation system. The agency issues a written call-up notice to an accused along with a questionnaire, and it also keeps the video recording of investigations,” he added.

Addressing the press conference, Federal Minister for Information and Broadcasting Chaudhry Fawad Hussain said a frustrated PPP Chairman Bilawal Bhutto Zardari abandoned the Azad Kashmir election campaign in the midway and PML-N Vice President Maryam Safdar would soon follow the suit. He said Bilawal seemed to be frustrated due to poor public response and less number of party candidates in the run. Likewise, PML-N leader’s frustration was evident since she had no narrative as indicated by her senseless and frivolous speeches. Moreover, the PML-N also failed to field candidates in several constituencies, he added. “All such factors will eventually force Maryam to leave the field, thus giving an upper hand to the Pakistan Tehreek-e-Insaf (PTI), which is frightening for them at the moment,” he added.

Fawad said out of frustration, the PML-N is already making a hue and cry over what they called ‘rigging’ in the AJK Legislative Assembly polls. He said the PML-N leader does not even know the exact number of wars Pakistan and India have fought on the Kashmir issue.

He said the PTI’s election campaign was robust and it would beat both the parties, which even could not manage to field required number of candidates in the AJK electoral arena. He said PML-N President and Leader of Opposition in the National Assembly Shehbaz Sharif, in a press conference earlier in the day on Monday, played up the power and gas issues instead of explaining his position with regard to the allegations of corruption against him. Shehbaz, Fawad said, should have answered to the queries about laundering of Rs 25 billion abroad on forged documents, but he narrated that he had built metro bus service in Punjab. Similarly, he added, when he (Shehbaz) was asked that his sons had transferred billions of rupees abroad, he told the investigators that he had worked on water supply schemes. When questioned about billions of rupees transferred to his accounts, Shehbaz said he had served the Punjab province, the minister added.

Fawad said both the PPP and the PML-N had one similarity that the funds given by the Centre for the development of Sindh and Punjab were traced in London. Some of the properties of former rulers were exposed through the Panama Papers scandal, and many more are yet to be unearthed, he added.