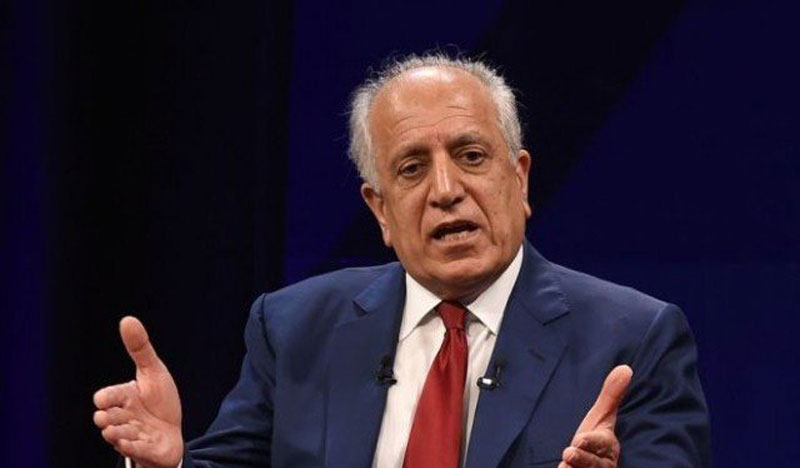 The team in a series of tweets said during the meeting, both sides discussed the progress and problems in the peace process, emphasizing on resolving the problems as soon as possible and to accelerate the process.

Khalilzad last week embarked on a visit to Qatar, Pakistan, and Uzbekistan to explore ways to push the fragile peace process forward amid the Taliban advance in parts of Afghanistan and a stalemate in intra-Afghan negotiations.

Taliban claim they control more than half of Afghanistan’s districts, the claim rejected by the Afghan government.

A State Department statement said on Saturday that Khalilzad will continue to engage in determined diplomacy and the pursuit of a peace agreement between the government and the Taliban.

“As part of the United States’ ongoing support of the peace process, he will work with all parties and with regional and international stakeholders to further advance a consensus on a political settlement,” according to a statement.

The statement said political accommodation on the part of all sides remains urgent. “The sooner the sides can agree to a negotiated settlement, the sooner Afghanistan and the region can reap the benefits of peace, including expanded regional connectivity, trade, and development.”

This is Khalilzad’s first visit following President Joe Biden’s announcement to complete withdrawal of American forces from Afghanistan by August 31.

The US envoy began the visit at a time when there is a stalemate in the Qatar negotiations and intensification in fighting has raised concerns about a possible civil war as Afghan several leaders have raised private militias to fight the Taliban.

Khalilzad will also join the Taliban negotiators who are currently on foreign visits. The Taliban representatives travelled to Russia and Iran last week and arrived in Turkmenistan on Sunday for talks on the peace process.

Afghan government on Monday raised objections at the Taliban visits and insisted that the visits should take place in consultations with Kabul.

“The Taliban’s visits to the region come as the group’s brutal attacks in recent months have killed more than 3,500 people, displaced more than 200,000 of our compatriots, disrupted public life and economic activities in dozens of districts,” an Afghan Foreign Ministry’s statement said.

Taliban on Monday said that a propaganda has been launched against them after the government forces “suffered humiliating defeats” across the country where thousands of soldiers defected and joined the Taliban, and nearly two hundred districts were cleansed from the security forces.

A Taliban statement said fake statements, documents, threats and other letters were recently being circulated on social media and even physically airdropped into some areas that impose restrictions on locals, threatens them, specifies gender laws, regulates lives, beards, movements and even contains baseless claims about marriage of daughters and other such issues.

Similarly fake videos and footage of multi-year-old video scenes showing activities of Daesh militias are also passed off as recent actions committed by the Taliban, according to the statement.

The statement rejected all the claims and said they will not allow anyone to transgress against people anywhere, or to impose laws and regulations by themselves, or to circumscribe lives, and neither has there been any ill-treatment of women and men, nor is anyone allowed to do so.

The statement further said all Taliban publications will be distributed through their official and other channels through which they have communicated with outlets over the past twenty years, adding any material published by any additional and novel channels should be ignored.