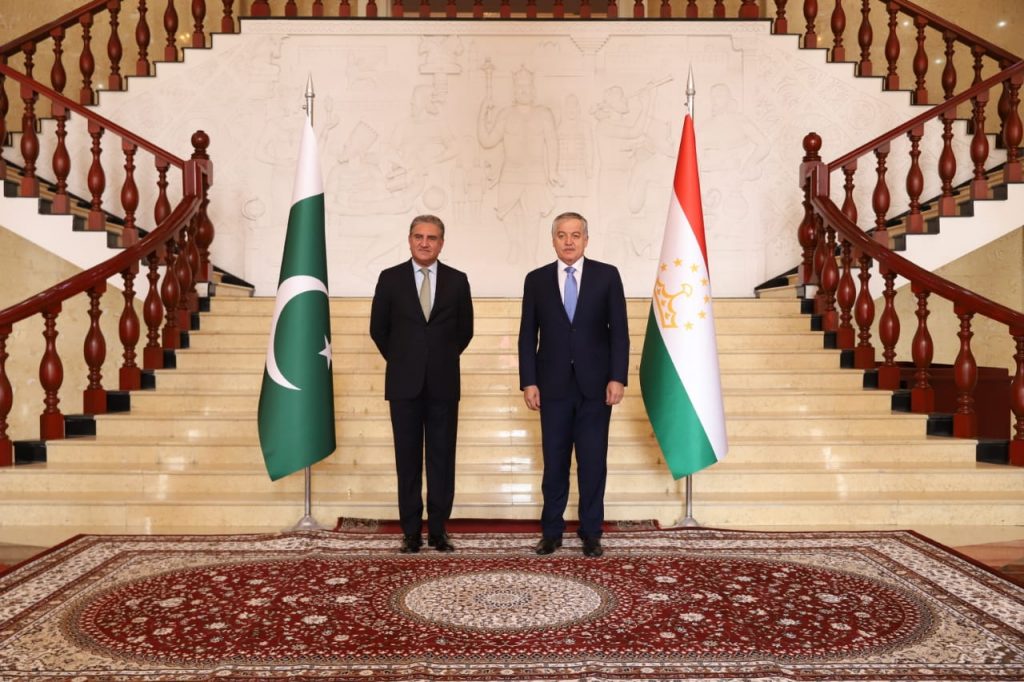 DUSHANBE (Tajikistan): Foreign Minister Shah Mahmood Qureshi and his Tajik counterpart Sirojiddin Muhriddin on Monday expressed commitment to enhance bilateral ties between Pakistan and Tajikistan in areas of economy, trade and people-to-people relations in line with the vision of their leadership.

In a meeting held on the sidelines of the Shanghai Cooperation Organization Council of Foreign Ministers held at the Tajik Ministry of Foreign Affairs, the two sides also stressed to take their cooperation at the SCO forum to next level.

The meeting focused on issues of mutual and regional importance besides promotion of bilateral cooperation in multilateral fields.

Foreign Minister Qureshi congratulated his Tajik counterpart on hosting the SCO Council of Foreign Ministers on the eve of the organization’s 20th anniversary.

He recalled that the recent visit of Tajik President Emomali Rahmon to Pakistan had further strengthened bilateral fraternal relations between Pakistan and Tajikistan.

He expressed satisfaction over the commonalities of views between Pakistan and Tajikistan on regional and global issues.

On Afghanistan, Qureshi informed his Tajik counterpart of Pakistan’s sincere reconciliation efforts for peace and said that the country was committed to continue playing facilitatory role for stability of the region.

Earlier, Foreign Minister Qureshi arrived in Dushanbe, Tajikistan early Monday to attend Shanghai Cooperation Organization (SCO) Council of Foreign Ministers (CFM).
The foreign minister was received by Tajikistan’s Deputy Foreign Minister Sharf Sher Alizada, Pakistan’s ambassador in Tajikistan Imran Haider at Dushanbe International Airport.
During his three-day visit, the foreign minister will lead Pakistan’s delegation at the SCO-CFM.
The invitation to the foreign minister to attend the SCO-CFM was extended by Tajik Foreign Minister Sirojiddin Muhriddin, the host and chair of the meeting.
The foreign ministers of all SCO member states will be participating in the SCO-CFM which deliberates on important regional and international issues and considers documents for approval and adoption by the Council of Heads of State.
The foreign minister will also participate in the meeting of SCO-Afghanistan Contact Group, being held at the ministerial level.
He  will share Pakistan’s perspective on the situation in Afghanistan and stress the imperative of a peaceful, negotiated political solution.
The foreign minister will confer extensively with foreign ministers from SCO countries and underscore Pakistan’s efforts in support of the Afghan peace process and durable peace and stability in the region.
On the sidelines of the meeting, he is scheduled to meet with his counterparts from Tajikistan, Kyrgyzstan, Uzbekistan, Afghanistan, Russia and China.
Bilateral and regional ties, besides issues of mutual interests would be discussed during these meetings.
During his stay, foreign minister Qureshi will call on President of Tajikistan Emomali Rahmon.
The Dushanbe SCO-CFM will consider several important documents for subsequent adoption in the SCO Council of Heads of State in September 2021.
The SCO’s major objectives include promoting mutual confidence and good-neighborly relations among member states, strengthening regional peace, security and stability, and create a framework for effective cooperation in the fields of politics, trade and economy, culture, science and technology, education, energy, transportation, tourism, environmental protection etc.