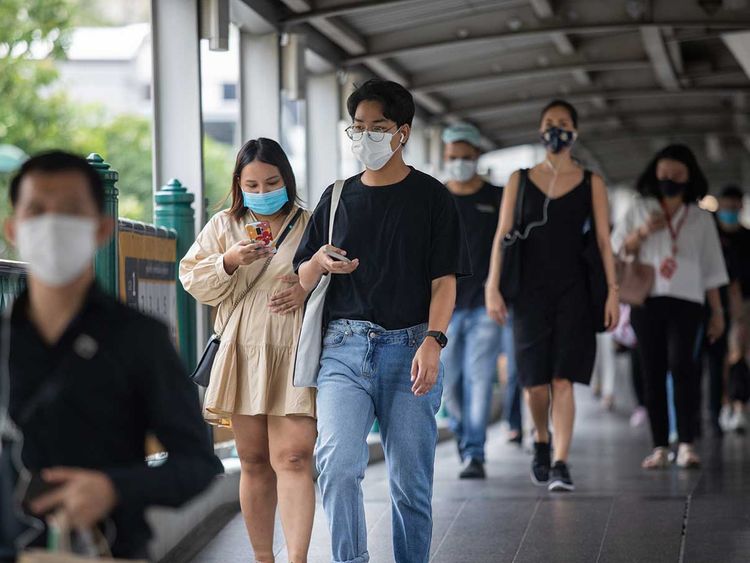 More than 10 million people were placed under fresh Covid-19 restrictions and a curfew in the Thai capital Monday, as the kingdom battled a surge of cases worsened by the highly infectious Alpha and Delta variants.

Thailand has so far recorded more than 345,000 cases and 2,791 deaths — with the bulk of them coming in this latest wave that started in April. First detected in clubs frequented by the Thai elite and politicians at an upscale Bangkok nightlife district, the surge has been exacerbated by a slow vaccine rollout and limited testing capacity. “The situation is worrying,” said Health Minister Anutin Charnvirakul. “We have a big toll of new confirmed cases and the Delta strain has spread to other provinces that are home to factories.” Health authorities also said they are monitoring seven people who have contracted both the Alpha and Delta variants. In addition to the capital, nine other provinces that have seen steady upticks in infections saw more restrictions bite. Checkpoints sprung up across Bangkok in the early hours of Monday as a 9 pm-4 am curfew came into force, with police wearing masks and facial shields stopping cars in the centre of the capital.

Residents are barred from gathering in groups of more than five people, while public transport networks will shut from 9 pm. Supermarkets, restaurants, banks, pharmacies and electronics stores within malls will be able to stay open but other shops have shuttered. Authorities on Monday also approved the use of administering the Chinese-made Sinovac jab as the first dose and AstraZeneca as the second. It did not elaborate why the decision was taken but it came after officials announced Sunday that nearly 900 medical staff — the majority of whom had received Sinovac shots — tested positive for the virus. Health authorities added that medical staff who had already received two Sinovac doses will get a booster AstraZeneca or Pfizer-BioNTech shot.

The government of Prayut Chan-O-Cha has come under vociferous criticism for its handling of the pandemic — from the management and procurement of vaccines to ad hoc enforcement of restrictions — and anger is high at the new measures. “The government decided to impose a lockdown but they don’t have compensatory measures for the people whatsoever,” said restaurant owner Arphawan Larangam. Some say the restrictions should have come sooner. “The government does everything so slow. If they really wanted to impose a lockdown, they should have done it a lot sooner,” said Jit, a university student. The outbreak has hit Thailand’s poor communities the hardest, especially those living in Bangkok’s slums, where social distancing is not possible. Long lines of people waited at two free testing clinics to get swabbed last week, with local media showing people camped under a tollway in Khlong Toei district — where the city’s largest slum is located — as they waited for negative results before going home to their families. One temple on the outskirts of Bangkok providing free funeral services to those unable to pay has been overwhelmed with bodies, and its crematorium is barely able to handle the demand.