Openers Javeria and Nahida shine for Pakistan ‘A’ 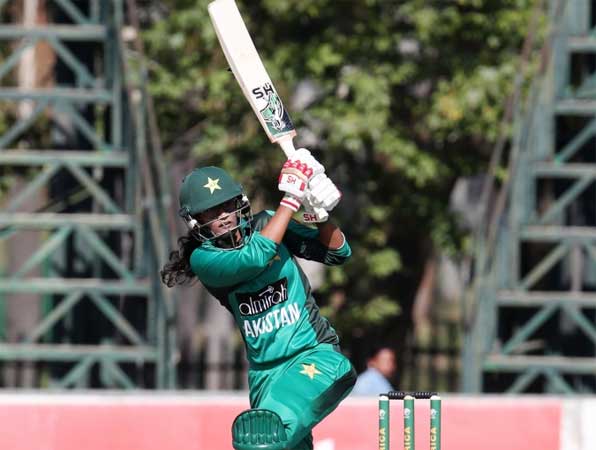 ISLAMABAD: Half-centuries by openers Javeria Rauf and Nahida Khan scripted a comfortable nine-wicket win for Pakistan Women ‘A’ over West Indies Women ‘A’ in the first 50-over fixture at the Sir Vivian Richards Stadium in St John’s Antigua on Saturday. The pair provided a solid 135-run start to dominate the 180-run chase before Nahida (58 off 85, seven fours) departed in the 28th over. However, Javeria returned unbeaten on a fluent 86 off 100 balls with 10 fours and a six. Kaynat Hafeez was the other not-out batter on 10 as the visitors romped to victory with 16 overs and nine wickets to spare. Javeria was the first to cross the 50-run mark as she cut off-spinner Mandy Mangru for a boundary in the 25th over. Nahida, the Quetta-born right-handed batter, recorded her half-century in the next over before the run-chase was briefly paused due to the passing shower with the tourists comfortably placed at 125 for no loss.

Earlier, West Indies were restricted for 179 for eight in 50 overs as Maham Tariq (two for 34), Anam Amin (two for 29) and captain Rameen Shamim (two for 28) shared wickets between them. Rashada Williams and Shakibi Gajnabi recorded half-centuries with the former top-scoring with a 113-ball 70, which included six fours. Shakibi contributed 56. The second of the three 50-over matches between the two sides will be played on Tuesday, 13 July, at the Coolidge Cricket Ground.