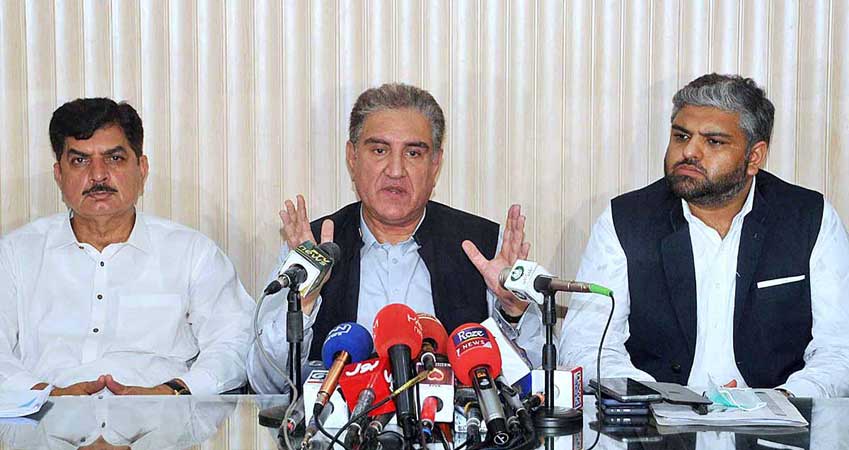 He said this after chairing a meeting of the District Coordination Committee at the DC office. The Foreign Minister stated that he invited Afghan Foreign Minister Haneef Atmar to visit Pakistan. Similarly, Pakistan was trying to contact senior leadership of Afghan Taliban and leaders of Northern areas of Afghanistan, he said and added that Afghans themselves would have to resolve issues hurting the peace process in their country. However, Pakistan was ready to cooperate for facilitation, stated Qureshi. The peace in Afghanistan will help improve regional connectivity which will ultimately lead to boost diplomatic reach and trade activities especially in Central Asian States and Afghanistan, he expressed.

Responding to a question, Qureshi stated that the international community had acknowledged Pakistan’s role in the peace process in Afghanistan. He stated that he held detailed discussions with US Secretary of State Antoni J Blinken for improving coordination and cooperation for peace in Afghanistan. He said that Pakistan and the US shared fundamental convergence which aimed at peaceful settlement in Afghanistan. Qureshi also remarked that he had briefed the National Assembly Committee and Senate Committee about the situation in Afghanistan and future challenges after pull-out of US forces, besides briefing the Defence Committee on the situation, wherein the DG ISI gave presentations to legislators for eight hours. The government wants to build a national strategy with complete national consensus, Qureshi said and added that another such briefing would be held soon.

To another question about relationships with the US after denial of air bases, Qureshi informed, during his recent discussion with US Secretary of States Antoni J Blinken, both Pakistan and US reiterated constructive engagement. Qureshi stated that America was a big market for Pakistan and Pakistan wanted to strengthen its economic ties with the US. Pakistan and the US have the same objective and it is to maintain peace in Afghanistan. There is no military solution for Afghanistan and thus peace is possible through talks only, said the Foreign Minister.

To a question about the influx of refugees in case of breaking out of civil war in Afghanistan, the Foreign Minister stated that Pakistan was already hosting three million refugees despite limited resources. Pakistan had also shared its concerns to the UN agency for refugees, he also said.

About China’s role in Afghanistan, Foreign Minister Makhdoom Shah Mahmood Qureshi stated that China also shared its border with Afghanistan. China can also play an important role in the reconstruction of Afghanistan as it has resources and modern technology, he said. Qureshi stated, Gwadar was emerging and similarly, Afghanistan would have a role for promotion of trade activities in the region.

About elections in Azad Kashmir, Qureshi observed that PTI would be a popular party in Azad Kashmir. Prime Minister Imran Khan will address three public meetings in Azad Kashmir and will present his point of view in-depth before the people. Qureshi stated that Bilawal Bhutto Zardari and Maryum Nawaz should not harm national interests. Opposition should criticize the government’s policies instead of issuing baseless statements about Kashmir, he remarked.

To a query about rigging, Qureshi stated that Elections in Azad Kashmir would be held under PML-N government and how it was possible for PTI to rig elections. The Opposition leaders should demonstrate political maturity, said Qureshi. The Opposition should criticize the government but at the same time it should have courage to accept criticism also, said Qureshi. He said the PPP leadership always talked about the sanctity of parliamentary norms, but the PPP itself was violating those norms in the Sindh Assembly. Qureshi also hinted that a political worker from minority underwent torture by police in Tharparkar in line with political victimization. Bilawal Bhutto Zardari, who is also the Chairman of the National Assembly Committee on Human Rights, should hold the police officer accountable for torturing political worker Ray Bakhat Bhail, otherwise Bilawal should resign from the Chairmanship of the Rights body, he said and added that the torture on a political worker from minority was politically motivated.

Earlier, Qureshi chaired a meeting to review the pace of work on different uplift schemes in the district. He informed that the PTI government was offering 28 projects in order to provide 4G facilities throughout southern Punjab. He added that Rs 6.47 billion would be spent on the project which would help improve internet speed especially in rural areas of South Punjab.