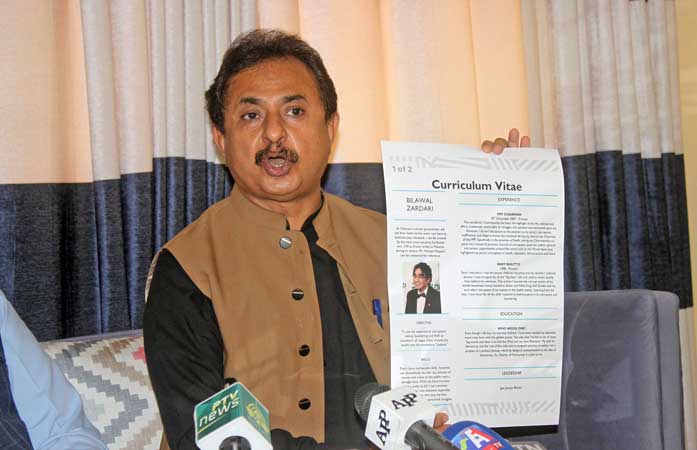 Opposition leader in Sindh Assembly Haleem Adil Sheikh on Saturday said Imran Khan was selected as Prime Minister of Pakistan by the Allah Almighty and elected by 220 million people to change the destiny of the country.

“These people call Prime Minister Imran Khan selected, yes! after dark rule of these incompetent rulers, the Allah Almighty selected a great leader for Pakistan, while elected by its own people”, Haleem said while addressing a press conference.

Flanked by Senator Saifullah Abro, he said Nawaz Sharif, Shehbaz Sharif and Maryam Safdar were infected by corruption and rejected by the people of Pakistan, whereas Bilawal Zardari was ‘defected’.

He said the infected, rejected and defected leaderships of Pakistan Muslim. League-Nawaz (PML-N) and Pakistan People’s Party (PPP) were misleading the Kashmiris during their public rallies in the Azad Jammu and Kashmir (AJK) with their ‘lies’ and ‘incorrect’ statements about Prime Minister Imran Khan who had been fighting the case of Kashmiri people in an unprecedented way.

He said the prime minister’s efforts for Kashmiris were not only acknowledged by the local media, but also international ones including TRT world (Turkish public broadcaster), Al-Jazeera and others.

“TRT world claims that PM IK [Imran Khan] is the most popular personality by far in the Indian [illegally] occupied Kashmir,” he said while citing a report of Turkish official television which quoted, “Due to IK’s strong and brave stance on Kashmir, Kashmiris have started to believe in Pakistan again. The belief that had been lost due to weak policies of previous governments”.

He also mentioned a report of Indian news outlet which stated, “The day Prime Minister Imran Khan delivered his speech at the United Nations General Assembly, most of his focus was on Kashmir.”

On the contrary, he said, there was Nawaz Sharif, who being Prime Minister of Pakistan, did not utter a single word on Kashmir in the United Nations where he went after the martyrdom of Burhan Wani in 2016.

It was Nawaz Sharif, who being Prime Minister, preferred to meet his business partner Sajjan Jindal and refused to have an audience with the Kashmiri Hurriyat leaders.

He said the ‘obnoxious’ face of Nawaz Sharif was fully exposed when he was walking side by side with Narendara Modi on a red carpet at a time when Kashmir’s roads were strewn with blood of Kashmiris.

Haleem Adil said the leaderships of both the parties including PPP and PML-N had never raised voice against state terrorism of India in Indian Illegally Occupied Jammu and Kashmir (IIOJK).

He said Bilawal Zardari, who was in mental disarray, was making confused statements in the AJK, while the people of Sindh were looking for him in the province.

The PTI leader said Bilawal could not become ‘Bhutto’ by rolling up sleeves and amplifying the tone of his voice. Regretting misuse of the charter, given to Sindh Chief Minister, by Bilawal, Haleem said he would take legal action against its illegal use. He shared the Curriculum Vitae (CV) of Bilawal with media, which according to him, allegedly sent by the PPP to the United States of America before his visit.

“As Pakistan’s current government will not bow down before the west, I am here to facilitate your demands. I can be trusted by the west since my party facilitated over 340 US drone strikes in Pakistan during its tenure,” he read from the CV’s introductory paragraph.

He also chided Maryam for being an ‘extra’ character in the national politics and said the people of Kashmir would never pay heed to her lies. Haleem said both Bilawal and Maryam should be ashamed of themselves for using derogatory language against Prime Minister Imran Khan who showed the courage to say ‘Absolutely not’ to the United States.

He said just like Gilgit Baltistan, both the parties would face the worst-ever defeat in the AJK’s upcoming elections. Senator Saifullah said Bilawal should rather focus on development of Sindh instead of making towering claims about the AJK’s uplift. He alleged that the PPP’s government in Sindh had only plundered the provincial exchequer during their rule spanning over 13 years, adding, the political system in the province was akin to dictatorship. There was no democracy in Sindh as people of the province were even deprived of basic amenities, he added.