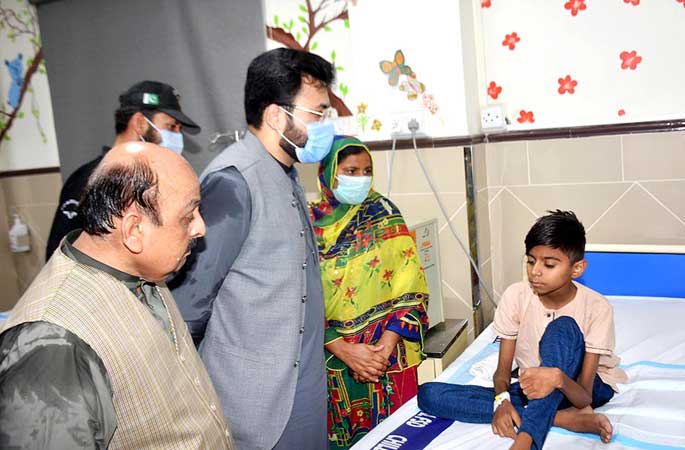 is implementing a comprehensive strategy to improve the health sector and provide people with the best treatment facilities.

Speaking at the inaugural ceremony of a kidney care centre at Children’s Hospital here on Saturday, he said the health cover would be ensured to every individual in Punjab by the end of December this year.

He said everyone in Dera Ghazi Khan and Sahiwal districts had received Insaaf health cards, and by the year-end, this facility would be provided to every person in Punjab. He said that 500,000 families had benefited from health cards in Khyber-Pakhtunkhwa province so far, and now people’s CNIC [computerised national identity card] would be their health card in that province.

The state minister said Prime Minister Imran Khan was a true leader of Kashmiri people and he had projected and highlighted the Kashmir issue at global level effectively. The Sharif family was an absconder and now they were trying to get NRO [a deal]. Maryam Nawaz had started the ‘Abbu Bachao’ campaign under the garb of ‘Kashmir Bachao’. However, people were fully aware of their nefarious designs and they would once again reject them in the elections. If Sharifs were sincere with Kashmiris, why [Indian premier Narendra] Modi came to attend a wedding ceremony of the family in Lahore. If the Sharifs were sincere with Kashmiris, why did Nawaz Sharif preferred meeting Indian actors over the freedom movement leaders of the Indian Illegally Occupied Jammu and Kashmir (IIOJ&K).

Farrukh Habib said, in fact, Maryam and Bilawal were test-tube politicians and they were successors of loot and plunder of their families. Now they were trying to save their “Abbus” from accountability.

Maryam was trying to protect Avenfield, while Bilawal was struggling for saving illegal wealth of his father stashed in Swiss banks. He said that Sindhi people had rejected the Pakistan Democratic Movement (PDM) and the similar treatment would be given to them by the AJK people. He said the Azad Kashmir people knew very well that only PM Imran Khan was their true leader, who represented their voice at the United Nations and other world forums.