Pakistan is only a facilitator and not guarantor of Afghan Peace Process: DG ISPR 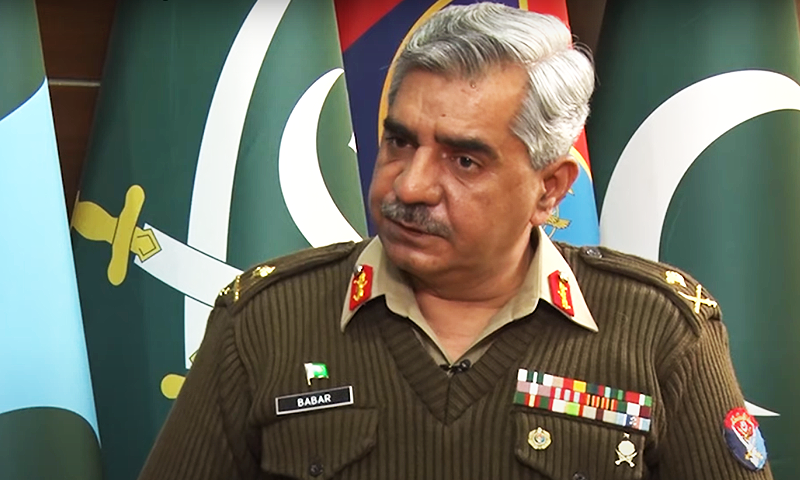 RAWALPINDI: Director General Inter Services Public Relations (DG ISPR) Major General Babar Iftikhar Saturday said the Afghan Peace Process has many aspects where it should be understood that Pakistan was only a facilitator and not a guarantor in the process.

The ISPR DG, in an interview, said that the main stay of resolution to the matter was on different factions of Afghans who would have to decide the future course of the issue.

Major General Babar said the peace process was at a critical stage as far as Pakistan was concerned and it took efforts to take a peace process sincerely with core vision of Afghan led and Afghan owned peace process.

The ISPR DG added that we needed to understand that it would be solely the decisions of the Afghans and would not be dictated by any foreign party.

Responding to another query, he said the US has withdrawn and its allied forces have left and would completely leave by 31 August whereas the stakeholders in the region would have to decide the issue in consultation with Afghan leadership.

He told that the counter strategy was long discussed and the world had observed that Pakistan has very sincerely dealt with the peace process.

“Pakistan has no favourites among Afghan stakeholders. The decision is to be taken by Afghans and they have to decide their leadership and in the case of any deadlock we can assist. Pakistan has made all out efforts and could not exceed beyond limits. Afghans have the capacity and capability to decide their future course themselves,” he said.

The ISPR DG was of the view that the gun (force) was not the solution to resolve the Afghan crisis as it could not be decided since the past two decades and it was not an option in the future.

Referring to the armed conflict taking place in Afghanistan among Taliban and Afghan Forces, he said this was just a phase and decision could be made only through dialogue.

He informed that Pak-Afghan Border security and management has been beefed up and the 2611km stretch of the border was 90% fenced whereas the leftover placed were either high altitude or glaciated places. However, forts were built with proper mechanisms and Frontier Corps (FC) new wings developed to manage the posts, he added.

The spillover effect after the civil war may come to Pakistan that had come earlier and we were very well aware of that and took many measures to cope with the situation, the ISPR DG told.

“Daesh and TTP groups are based in Afghanistan and attacking Pakistan’s Armed Forces whereas we bore casualties during border fencing,” he informed.

Major General Babar said the mechanism for Afghan border fencing was better and the Armed Forces were very well prepared, adding, “God Willing, we should be able to take care of this situation.”

Replying to another query on impending Afghan Refugees influx in case of any civil war, he said the Interior Ministry has made contingency planning to manage refugee inflow in case of violence whereas the international community and regional stakeholders would have to decide the Afghan issue.

He noted that Pakistan’s approach was very clear as it remained committed to never let its soil be exploited . Unfortunately, there has been no serious effort made by the international and Afghan forces to make air tight control to contain terrorist activities against Pakistan, he noted.

He maintained that the responsible withdrawal meant a meaningful exodus of the US Forces after a complete transition which was the demand of all stakeholders.

‘India’s investments seem to be sinking’

During the interview, Gen Iftikhar said that India’s investments in Afghanistan seemed to be “sinking”, adding that Indian propaganda against Pakistan and its role in the peace process was “not gaining traction”.

He said that India’s frustration with its investment in Afghanistan was evident. “If they had made these investments with sincerity, they would have no need to be frustrated. But because they were concentrating on using Afghanistan to harm Pakistan, they can see their entire investment sinking.”

He said “spoilers” were trying to hold Pakistan responsible for the situation deteriorating in Afghanistan.

“But there is no truth is these allegations. The world is very well aware that Pakistan has made every effort to solve the Afghan issue, without violence and according to the wishes of the Afghan people.”

He said India was not gaining any traction on the propaganda it was trying to perpetuate in this regard.

The ISPR DG said that Indian propaganda would not get any traction whatever propaganda level they were going to apply.

Commenting on Taliban officials saying the group had taken control of 85 per cent of territory in Afghanistan, the ISPR chief said that a lot of hard work and money had been putting into training the Afghan National Army (ANA).

“The ANA is of course present on ground […] but their strategy seems to show that they are probably more concerned about the main cities.”

He said that the Taliban’s claims were an “exaggeration” and the number was likely closer to 45-50pc.

He reiterated that there was a force on ground in Afghanistan with its own capacity and potential. “But the reports that are being received right now show an increase in the speed of the Taliban.”

He said that the US was in the process of withdrawing troops which would be completed by August 31. “At the end of the day, regional stakeholders will have to sit down with the Afghans to find a solution.”