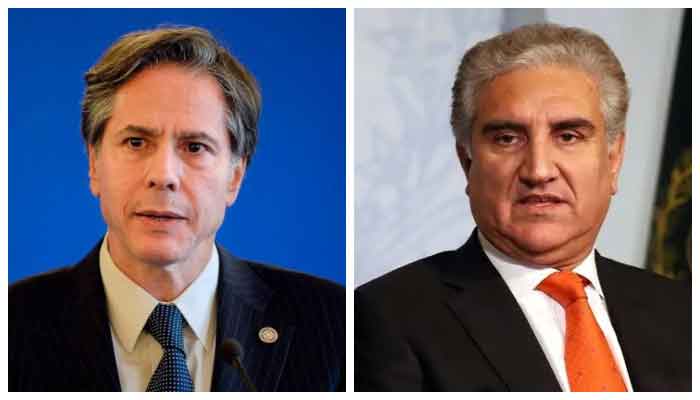 Foreign Minister Shah Mehmood Qureshi had focused exchange of words with his US counterpart and stated that there was a “fundamental convergence” between Islamabad and Washington on the “need for a sustainable peaceful settlement in Afghanistan”.

The Foreign Office spokesperson further stated that Foreign Minister Shah Mahmood Qureshi expressed his views during a phone call with US Secretary of State Antony Blinken. The spokesperson said that the bilateral and mutual relations and important developments in the region were discussed by both the leaders.

“On bilateral relations, the foreign minister emphasised Pakistan’s commitment to forging a broad-based, long-term, and sustainable relationship with the United States that was anchored in deep economic cooperation, regional connectivity and peace in the region,” said the FO.

The released statement also stated that the foreign minister expressed his views on Pakistan’s focus on geo-economics under the leadership of Prime Minister Imran Khan. He highlighted the importance of increasing economic, trade, and investment ties between Pakistan and the United States.

“With respect to the situation in Afghanistan, the foreign minister stressed that there was a fundamental convergence between Pakistan and the United States on the need for a peaceful settlement in Afghanistan,” said the FO.

During the conversation, the FO said that Pakistan’s top diplomat highlighted the steps taken by Islamabad in “support of the Afghan peace process”.

“Foreign Minister Qureshi emphasized that securing peace in Afghanistan was the shared responsibility of all stakeholders inside Afghanistan as well as key regional and international players,” said the statement.

The FO also said that Qureshi urged the US secretary of state that it was “imperative for all relevant stakeholders to press all Afghan parties to engage constructively towards achieving an inclusive, broad-based and comprehensive political settlement”.

“For its part, Pakistan will remain a reliable partner for peace in Afghanistan,” said the FO statement.

It also said that both the officials highlighted the need for the two sides to continue close coordination and cooperation to ensure meaningful progress in the peace process.

“The two sides also exchanged views on regional connectivity and other key issues,” read the statement. It added that FM Qureshi also thanked Secretary Blinken for the COVID-related support extended to Pakistan by the United States.

“Pakistani Foreign Minister Shah Mahmood Qureshi and I had a call to underscore our desire for a stable and sustainable bilateral relationship,” said the tweet.

Blinken said that he looks forward to continued cooperation by Pakistan “on the Afghan peace process, tackling COVID-19, supporting regional stability, and other key issues”.