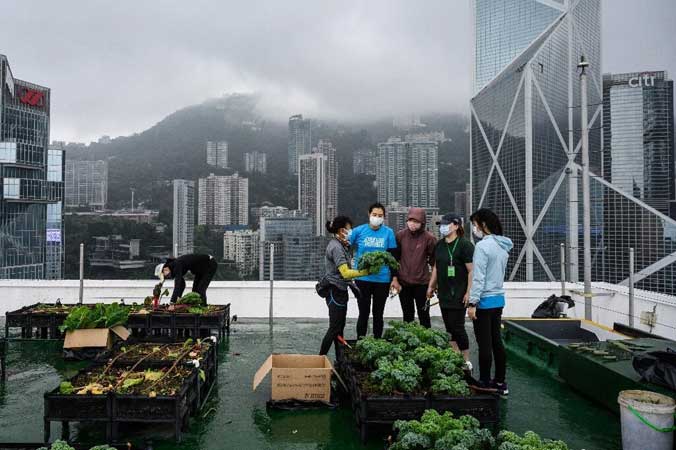 With their heads in the clouds and their hands in the soil, a group of office workers are busy harvesting the fruits of their labour on the roof of a Hong Kong skyscraper.

Invisible to those below, a sprawling garden of radishes, carrots and rhubarb is flourishing at the top of the 150-metre tall Bank of America tower, a stark and colourful contrast to the monotone shades of concrete, steel and glass of the city’s financial district.

The farm is among more than 60 that have sprouted across the space-starved city since 2015 — on decommissioned helipads, shopping mall rooftops and public terraces — thanks to initiatives like Rooftop Republic, a local social enterprise which promotes urban farming.

Cofounder Andrew Tsui sees the rooftop farms as a way for people to reconnect with how sustainable food can be produced in what he calls the current “instant-noodle city lifestyle” that sees so much waste.

“What we are looking at is really how to identify underutilised spaces among the city and mobilise the citizens, the people, to learn about food,” the 43-year-old told AFP during a blustery site inspection of the skyscraper’s garden. Tsui believes Hong Kongers need to re-establish a relationship with what they eat that has been broken “since we started outsourcing our food and relying so much on industrialised production.”

According to government statistics, Hong Kong throws out some 3,500 tonnes of food waste a day — the equivalent weight of 250 double-decker buses. Less than a quarter is recycled.

And around 90 percent of the food eaten by the city’s 7.5 million inhabitants is imported, mostly from mainland China.

But while Hong Kong is one of the most densely packed places on earth, there is still considerable space to grow food locally.

“So we could have the potential of doubling the supply of land for growing food,” he said.

“The challenge for us is to design urban farming as a lifestyle to integrate into our daily life,” he added. “And the first step for that, of course, is to be accessible.”

To incorporate urban farms into the blueprints for office buildings, Rooftop Republic closely collaborates with architects, developers and property managers.