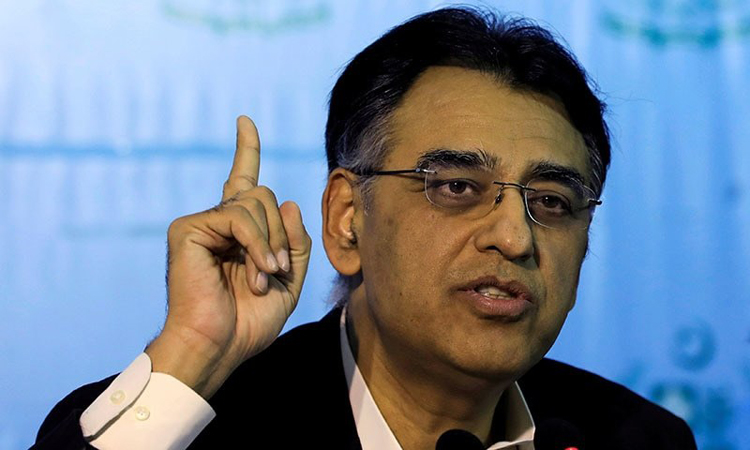 Federal Minister for Planning, Development and Special Initiatives Asad Umar said Friday that there are clear early signs of fourth wave of coronavirus pandemic in Pakistan, which the artificial intelligence models had suggested earlier.

In a tweet, the federal minister said that two weeks back he had tweeted that country’s artificial intelligence models were showing possible emergence of fourth wave and now there are clear early signs which show it has started.

He said field reports are showing complete disregard of the condition of vaccination for those attending indoor weddings and going to indoor restaurants and gyms. If the owners of these facilities do not show responsibility and ensure compliance, there will be no choice but to shut them down, he warned.

The National Command and Operation Centre (NCOC) on Friday announced that unvaccinated people will not be allowed to travel by air starting August 1. In its review of the measures put in place to curb the spread of the coronavirus, particularly in view of the impending spread of the Delta variant, which it termed ‘extremely dangerous’, the NCOC also declared it mandatory for adult students to get themselves vaccinated by August 31.

The NCOC said that in view of the “extremely dangerous” Delta (Indian) variant of coronavirus, vaccinations must be ramped up, and provided July 31 as the deadline for workers to get inoculated. According to a statement by the forum, Delta variant cases have emerged in Pakistan and there is a possibility that these would lead to a fourth coronavirus wave.

To tackle with the variant as well as other variants that have emerged in Pakistan, the NCOC has chalked out a plan of action. “Failure to take precautionary measures against the Delta variant can lead to dangerous consequences,” said the statement.

The NCOC observed that due to the Delta variant, hundreds of thousands of people in India died, and coupled with a shortage of oxygen, countless people suffered. It decided that enforcement of safety precautions would be ramped up, especially during the July 9-18 period.

Various proposals are under consideration to curb unnecessary movement on Eid, the statement said, adding that the decision to implement the proposals will be made keeping in view the spread of the virus.

The national tally on Friday of total active Covid-19 cases was recorded at 35,573 as 1,737 more people tested positive for the deadly virus and 774 people recovering from the disease on Friday. Twenty-five coronavirus patients died on Friday, 24 of whom were under treatment in hospitals and one of them perished in his home, according to the latest update issued by the NCOC. Most of the deaths occurred in Sindh, followed by Punjab. Out of the total 25 deaths, 16 died were under treatment on ventilators.

There are 1,971 Covid-19 infected patients admitted in various Covid-19 dedicated healthcare facilities of the country. The national Covid-19 positivity ratio on Friday was recorded at 3.65%. The maximum ventilators are occupied in four major cities, including Islamabad 14%, Lahore 18%, Bahawalpur 12% and Multan 14%. The maximum oxygen beds are also occupied in four major cities of Gilgit 36%, Multan 17%, Skardu 67% and Rawalpindi 20%.

Around 210 ventilators are occupied elsewhere in the country while no Covid-affected person is on ventilator in Azad Jammu and Kashmir (AJK), Balochistan, and Gilgit Baltistan (GB).

Around 911,383 people have recovered from the disease so far across Pakistan, making it a significant count with over 90 percent recovery ratio of the affected patients.