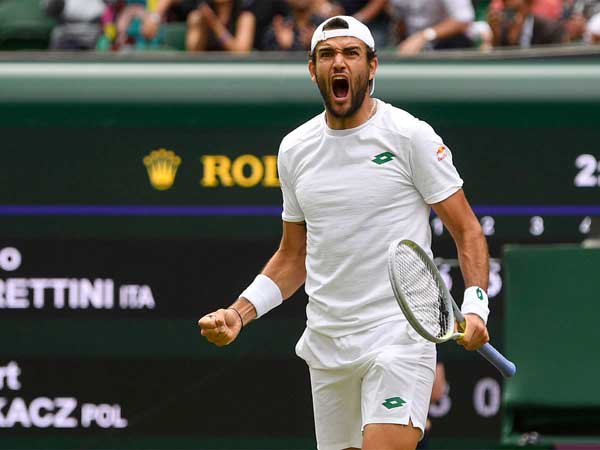 LONDON: Matteo Berrettini became the first Italian to reach a Wimbledon singles final on Friday with a four-sets victory against Hubert Hurkacz as Novak Djokovic set his sights on a 30th Grand Slam championship match. Berrettini claimed a 6-3, 6-0, 6-7 (3/7), 6-4 win over his Polish opponent who had knocked out eight-time champion Roger Federer in the quarter-finals. World number nine Berrettini will face either Djokovic or Denis Shapovalov in Sunday’s final where he will attempt to become Italy’s first men’s Grand Slam champion since Adriano Panatta at the 1976 French Open. “I think I never dreamed about this because it was too much for a dream,” said Berrettini. “I am trying to be the best at everything but after the third set I was feeling I deserved to win it but lost it. I said ‘it doesn’t matter’, I was feeling the stronger player and that’s what I said to myself and eventually it paid off.”

Should he win on Sunday, Berrettini may be able to celebrate a national double with Italy facing England in the Euro 2020 final in London later that day. “So far it is the best tennis day of my life but hopefully Sunday will be even better. I feel kind of chills but I am doing it, so I have to believe it.” Berrettini, having wasted three break points earlier in the first set, eventually broke through in the seventh game, backing it up in the ninth, converting set point courtesy of an ugly forehand shank from the Pole.

The 25-year-old then raced through the second set in just 23 minutes, a Hurkacz double fault and a wrong-footing forehand allowing Berrettini to seal a 10th successive game. That became 11 games in a row at the start of the third set before 18th-ranked Hurkacz, bidding to be the first Polish man to make a Slam final, stopped the rot. Hurkacz held on and swept the third set tiebreaker but his momentum was quickly halted as the Italian broke for 1-0 in the fourth. Berrettini was unable to convert a match point in the ninth game but made no mistake on his own service. The Italian fired 22 aces, taking his tournament total past the 100-mark, and 60 winners. He only faced two break points, both of which he saved.