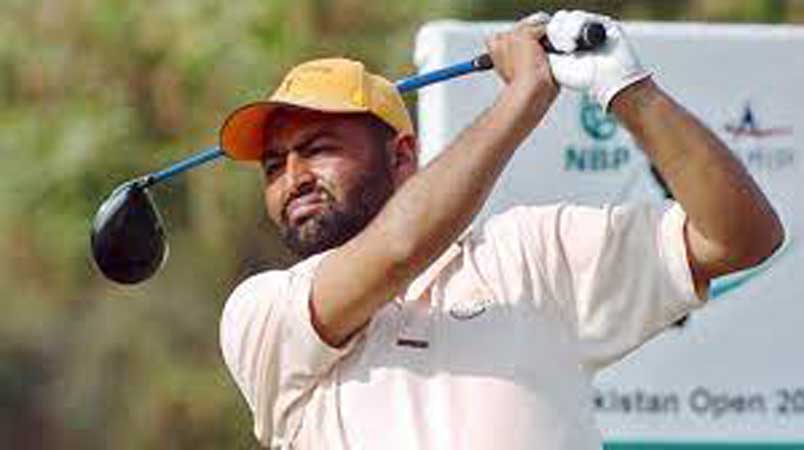 KARACHI: Mohammad Shabbir Iqbal, number one ranked golf professional of the country, took over the leadership reins in the battle of the golfing greats of Pakistan after conclusion of the second round of the 25th CNS Open Golf Championship at the Karachi Golf Club Golf Course here on Friday. Carrying a prize purse of Rs.8.5 million plus a wholesome reward of a Toyota Fortuner for winner of a hole in one, this championship is a grand one indeed offering huge financial incentives to the top performers in addition to glory and recognition. During the course of the second round, the most steadfast conqueror, Shabbir, was again the champion in command and he virtually lit up the proceedings with worthy excellence and admirable and exquisite display of skills. His hitting off the tees on all par fours and par fives was power oriented with accuracy as the hall mark and his approach shots from the fairways were firm and crispy. And through perfection in application of golfing skills he managed to complete the 18 holes with an unblemished score of gross 67, completely free of any kind of hiccups. His aggregate score for two rounds was remarkable 69 plus 67 adding up to 136, eight under par. By virtue of this spell of masterly golf, he was on top of the leader board yesterday.

A few more contenders looking good were Matloob Ahmed of Lahore Garrison and Waheed Baloch of Karachi Golf Club. With two rounds scores of 69 and again a 69 yesterday and a two rounds aggregate of 138, Matloob, a notable adversary of Shabbir, was placed in second position, two strokes behind the invincible one. Also placed at the aggregate score of 138 was Waheed Baloch, the seasoned one of Karachi Golf Club. These two experienced golf professionals appear eager to undo the might of Shabbir in the two rounds to come but whether this urge and desire can be translated into reality remains to be seen.

Some more golf professionals with immense capabilities brought in good scores through application of skills combined with technical handling of the golf course challenges. Mohammad Nazir of Rawalpindi was one and young Ahmed Baig of PAF Skyview was another. Both these proficient ones were bunched together at an aggregate two rounds score of 139, five under par. While they may be trailing the leader by a margin of three strokes and not appearing to be cowed down by the winning record of Shabbir, they seek to emerge as spearheads after performing brilliantly in the third round on Saturday (today). A few more with decent scores were Mudassir Iqbal (Karachi), Mohammad Zubair (Karachi) and another Mohammad Zubair from Islamabad and Mohammad Munir (Rawalpindi) bracketed at a two rounds aggregate of 142, two under par. And competition wise, a close contest is expected over the remaining two rounds. A highlight of the day was a hole in one by Afsar Ali of Karachi Golf Club and thereby he won the Toyota Fortuner. What a great shot and the huge reward that it fetched.