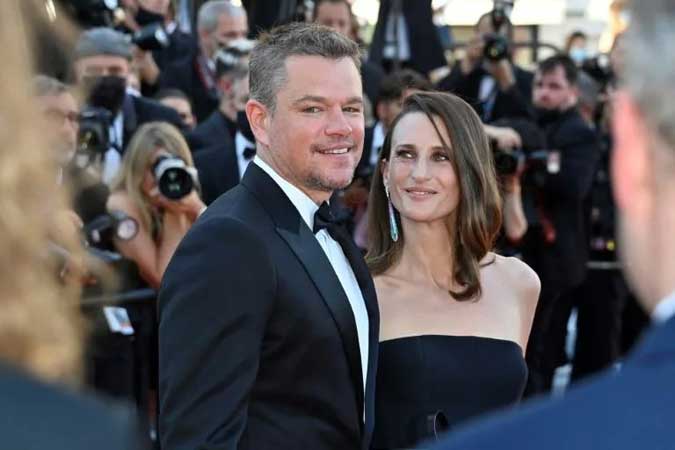 Matt Damon brought a slice of redneck middle America to Cannes Friday with “Stillwater”, a film about a washed-up oil worker who seeks to save his daughter and their damaged relationship.

It has been a very French affair from the start: set in Marseille on France’s southern coast, made with a mostly French crew and French co-writers, and featuring local star Camille Cottin of “Call My Agent” fame. Damon says he fell in love with Marseille during the filming: “I just think it’s a spectacular place,” he told reporters in Cannes. “If I was a young guy in France, this is the city I would live in. There’s so much culture and diversity.”

The process even turned the film’s American director and cast into fans of the local football team.

“Sometimes American film-makers come to Europe or into France to make a movie and they pitch their tent and keep the French film-makers on the outside,” Oscar-winning director Tom McCarthy told AFP.

“But we said: ‘We can’t do that here’,” he said. “It really is a collaboration, a meeting of cinema cultures.”

Damon plays Bill Baker, an oil rig worker from Oklahoma who travels to Marseille to help his daughter who is in prison for a murder she says she didn’t commit.

He doesn’t speak French, and his bulky frame, baseball cap, chequered shirts and unfashionable jeans make him stick out in the Mediterranean coastal city like a caricature of an American midwestern tourist.

“He’s from the heart of Trump country, he is very much part of that culture,” Matt Damon told AFP in an interview.

“It looks like it’s going to be that standard Hollywood setup, a father going to exonerate his daughter, help his daughter and he ends up using his skills to do it,” Damon said.

Damon said he went to great lengths to get his character’s look right, spending time with oil workers to get their advice on clothes, eating the same food they do, and working out to bulk up.

“We hung out with these roughnecks, who were just invaluable,” Damon said. “They’d go: No it’s this type of blue jean, because they have fire retardant on them. And it’s this shirt, not that. It’s almost like a uniform,” Damon said.

He put on weight for the role “because they’re very big guys. The stuff they’re picking up is heavy. I’m in shape, but lifting the things they lift, I’d go, Oh my god,” he said.

McCarthy and his team invested similar efforts to make the Marseille shoot as authentic as possible.

“In many ways it’s my most complicated film structurally” said McCarthy, whose film “Spotlight” won the best picture Oscar.

Shot almost entirely on location, it includes a key scene shot at the Stade Velodrome, the home stadium of Olympique de Marseille (OM), during an actual match, which he said was unforgettable.

“They’re a team with incredible heart and incredible fans. The energy in that stadium and filming there, that was a special couple of nights,” McCarthy said.

The director said his film’s main character was seeking redemption without achieving it, and acknowledged that the same could be said of Olympique de Marseille who, disappointingly, ended the last League 1 season only fifth.

“It’s been a long struggle for redemption at OM,” McCarthy said. “And now also for the French national team, but we won’t go there,” he added, referring to France’s shock exit from Euro 2021 tournament.

Although premiering in Cannes, “Stillwater” is playing out of competition at the festival, which runs to July 17.