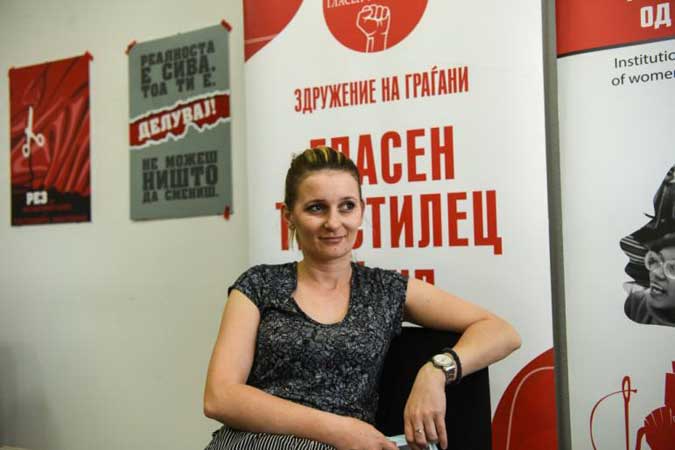 A sewing machine and a raised fist, a woman superhero ready to fight back against bad bosses: posters at the office of former textile worker Kristina Ampeva highlight her fight to protect women at work.

She swapped her sewing machine for a megaphone in 2016 after years working in “horrible” conditions in factories making clothes and leather goods mostly for western European markets.

“I joined this fight with all my heart and soul to help those disenfranchised workers,” she says at the office of her NGO, Loud Textile Worker, in the eastern city of Shtip — an area dominated by the garment industry.

The NGO helps individual workers — most often women, who make up 80 percent of the garment factory workforce — and pushes for wider reform, with successes including helping to bring the minimum wage to the industry.

But North Macedonia is still far from real equality.

This year’s Gender Gap Index from the World Economic Forum ranks the country at 71 — well behind neighbours Serbia (19th) and Montenegro (48th) — and says the situation has barely changed in 15 years.

Data from the Paris-based Organisation for Economic Co-operation and Development (OECD) show that 54 percent of women had jobs last year, barely an improvement from 2010 and well below the average for OECD countries of 64 percent.

There has been “no significant improvement” with wages in recent years, says researcher Neda Petkovska from the NGO Reactor.

And marginal progress in getting women into work is likely to be all but wiped out by the coronavirus pandemic, she says.

The struggle with gender equality is particularly pronounced in Shtip, an hour’s drive from the capital Skopje, which was a stronghold of the garment industry in Yugoslav times and remains so today.

Dozens of drab, low-rise factories on the city’s outskirts churn out shirts, shoes, leather products, dresses and anything else the market might demand.

During the morning and evening rush hours, buses shuttle workers back and forth between the centre and the industrial zones.

Almost all the workers on the factory floor are women.

“If you don’t have political connections, the garment industry is the only job open for you in Shtip,” says Ampeva.

Women form the backbone of an industry that accounts for roughly 13 percent of North Macedonia’s economic output and more than one quarter of its exports, but most are paid the minimum wage of about 250 euros ($295) a month — barely enough to survive.

Many of the women are their family’s only breadwinner in the formal economy, meaning thousands of households rely on those jobs for social security and other benefits.

So when things go wrong, the cost can be catastrophic.

She has been defended by Ampeva’s NGO since she refused to sign a 30-day fixed-term contract with her company — she had been working for them for six years on a permanent contract.

“They told us: ‘You should sign, it is a secure job.’ There is no secure job with one-month contract,” says the 32-year-old, who is on enforced unpaid leave at the moment.