We do not control what happens on Afghan soil, situation not stable: Moeed Yusuf 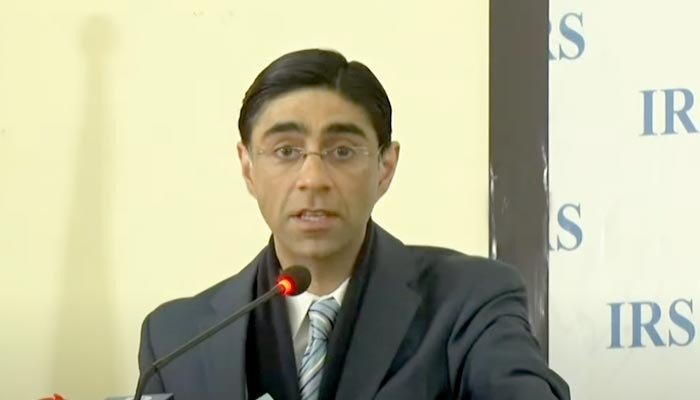 He said that the expulsion of the US forces from Afghanistan is more of a “psychological evacuation” instead of a physical one, adding that Pakistan should make efforts to maintain constancy and peace in the war-stricken country.  He said that the Government of Pakistan is planning a strategy for the future of both the countries, adding that the Pakistani government is planning to connect with the world in terms of development, partnership, and regional peace.

The national security adviser also stated that the forum about the security measures are prevailing challenges and the government is taking measures for the country in terms of border security and said that a special visa policy has also been formulated for Afghanistan.  He also spoke about the civil-military coordination in Pakistan and said that problems that arose in the past in this regard are no longer there.

Foreign Minister Shah Mahmood Qureshi also spoke to the Senate Committee on Foreign Affairs and said the strengthening of the Tehreek-e-Taliban Pakistan’s (TTP) ranks was not in the interest of Pakistan and categorically stated the country would “not favour any sort of Talibanisation.”

In his remarks, FM Qureshi said: “The comeback of TTP is not in Pakistan’s interest. We do not want Talibanisation in our country.” The foreign minister expressed concerns over the chances of a civil war after the foreign military forces pulled out completely from Afghanistan and said Pakistan did not want such a scenario to repeat.

He stressed that “power-sharing” of different Afghan factions was the best option to avert a civil war. Pakistan desired an honorable return of the Afghan refugees, which he said, should be made part of the Afghan peace process.

The foreign minister said after the Taliban refused to attend the Istanbul Peace Process, Pakistan held a tripartite meeting with Afghanistan and Turkey. Speaking about Afghan refugees, he called upon the international community to find a solution for their repatriation to their homeland.

FM Qureshi said Pakistan would welcome the support extended by China for the stability of Afghanistan. Pakistan’s relationship with Iran is getting stronger, he said and mentioned the agreement with Tehran on the establishment of border markets.

Meanwhile, Foreign Office Spokesperson Zahid Hafeez Chaudhry, in a statement issued today, said that Pakistan welcomes Iran’s engagement with Afghan parties to achieve a negotiated political settlement. In a response to the media regarding the visit of Taliban and Afghan government delegations to Tehran, he said Pakistan considers the role of Iran in the Afghan peace process as “important”.

Chaudhry said Iran, like Pakistan, is a neighboring country of Afghanistan and host to millions of Afghan refugees. He expressed hope that Afghan parties would seize the opportunity and achieve an inclusive, broad-based, and comprehensive political settlement.