PPP’s words are not like PTI’s U-turns and PML-N’s hollow claims: Bilawal Bhutto 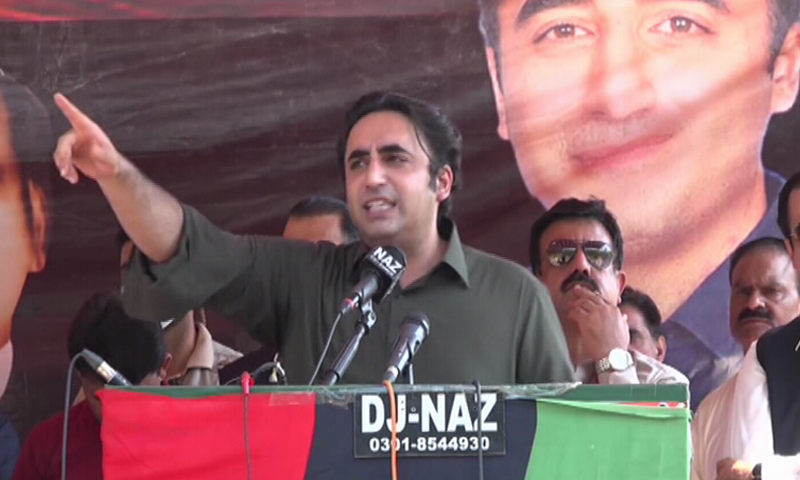 ISLAMGARH: Pakistan People’s Party (PPP) Chairman Bilawal Bhutto Zardari addressed the people of Islamgarh in a series of campaigns pertaining to the elections of July 25.

The political gathering at Azad Jammu and Kashmir’s (AJK) town of Islamgarh in Mirpur district saw the amalgamation of many political leaders who urged the masses of Kashmir to vote for Chaudhry Abdul Majid and show unity during the elections.

PPP leader Qamar Zaman Kaira also addressed the audience, giving his greetings to the people and thanked them for sparing their time in the scorching summer heat.

He spoke about the opposition defaming Chaudhry Abdul Majid, President of the PPP in AJK and clarified that PPP’s spirits were high and they believed in their people to vote for them.

Addressing the public gathering during his campaign, Bilawal Bhutto initiated his speech with the infamous ‘naara Bhutto’ and proudly stated the heritage of Chaudhry Abdul Majid’s affiliation with the party since three generations who started work with Zulfikar Ali Bhutto and aided Mohtarma Shaheed Benazir Bhutto after she took the reigns of the party after the assassination of her father.

The PPP Chairman sponsored Qasim Majid, son of Chaudhry Abdul Majid, to lead the people of Kashmir and play a ‘long innings’ for the people to serve them.

‘Our mission is to carry on the the legacy of former prime minister Shaheed BenazirBhutto,” he added.

He urged Qasim Majid to serve the people if they chose him as their leader.

“We have always served the poor whether it is through the Benazir Income Support Program (BISP) or otherwise and have always stood by them and defended them,” and added that PPP always provides relief to the people.

Reiterating his point of ongoing inflation, he stated that during PPP’s tenure, salaries witnessed 120 percent increase while army personnel witnessed a 175 percent increased to cope up with the economic crisis.

Bilawal Bhutto expressed confidence in the ‘jyalas’ of Kashmir and said it would be safe as long as they gave their vote.

Referring to the prime minister Imran Khan as a puppet, he made a reference to Kulbushan Jadhav who was caught in Pakistan, stating that the PM wanted to give him an NRO in the dark of the night.

“Our first step after coming to power will be a surge in salaries, the second an increase in pension and the third will be providing the youth with jobs,” he said, adding that the PPP has the history of a better public service delivery as it never remained in the hunt for rule.

He continued: “Have PPP’s words … These are not like PTI’s U-turns and PML-N’s hollow claims. We will play a long innings. We will stay by you. We will continue serving you till death.”

The elections of July 25 will see the next PPP Prime Minister, Bilawal added.