Who gave Imran Khan the right to sell the blood of the Kashmiri people, asks Maryam Nawaz 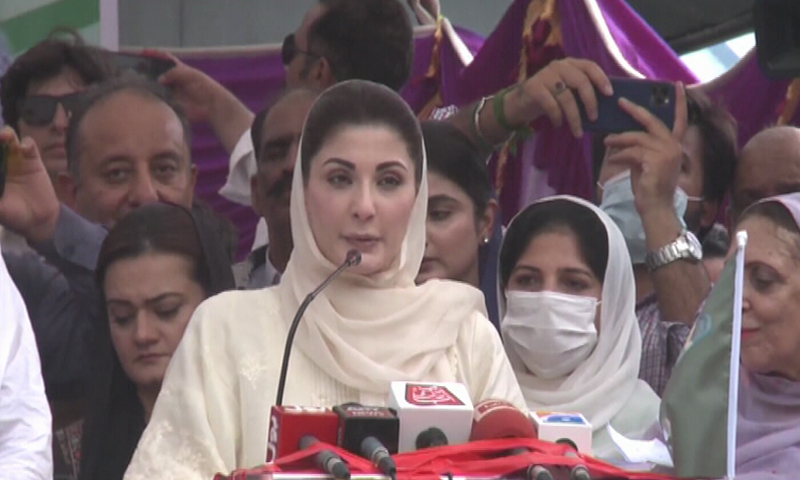 MUZAFFARABAD: Pakistan Muslim League-Nawaz (PML-N) Vice President Maryam Nawaz on Friday in an address to the people of Patikka in Azad Kashmir, termed the ruling Pakistan Tehreek-i-Insaf (PTI) as a virus that has eaten up Kashmir and has put it at the mercy of the Indian forces.

Addressing the rally in the state to kick off the party’s campaign for the July 25 elections, she revealed that her sources informed her of PM Imran Khan’s intentions for the same.

“How will you face the Kashmiris after mercilessly leaving it at the feet of the Indians?” Maryam Nawaz questioned the premier. “Who gave you the right to sell the blood and honour of the people of Kashmir?” she added.

“I will speak about Kashmir and that is why I am here. I will also talk about how the one, who had stolen your votes, deprived you of wheat, sugar, electricity and medicines, and what things you must ask from (Prime Minister) Imran Khan.”

Maryam Nawaz criticised the prime minister by calling him ‘Kashmir Farosh’ (Kashmir seller) stating what would a man who had spent all his life in the playground know about a thing such as foreign policy.

“The bat that he used in the cricket ground is the same one he used to hit and kill the people of Pakistan,” she said.

“Imran Khan has no right to play with the lives of the 220 million population if he is so incompetent and cannot defend their rights.”

The PML-N leader sought to remind the gathering that she is a Kashmiri with Kashmiri blood coursing through her veins.

She said when Nawaz Sharif was prime minister; he did not allow the people to beg for wheat and sugar standing in lines whereas Imran Khan treated the awam like beggars for only one bag of sugar. In addition, she pointed out that these were the first summers in Pakistan in which the country was historically facing load shedding of gas at the hands of the incumbent government.

“The selectors who are now supporting Imran were against Nawaz Sharif when he was taking measures to provide relief to the masses,” alleged Maryam Nawaz.

She condemned the uncontrolled inflation levels in the tenure of the government of Imran Khan stating that the cost of sugar, roti and medicines had surpassed heights. Prices of medicines had increased by 600%.

The PML-N leader promised that the people of Kashmir would not be subject to the same problems faced by the Pakistani people and that they would not be burdened with the gas, inflation and electricity crisis they had previously faced.

Maryam said Imran Khan was now again talking about approaching the International Monetary Fund (IMF), hinting “he doesn’t have money to provide people with food supplies, but he has enough resources and money to buy votes in the AJK elections,” she claimed.

She insisted that the PML-N was still a popular political party in the AJK. “You can suppress the voice of Nawaz Sharif, you can declare him absconder… but the people of AJK still admire him,” she added.