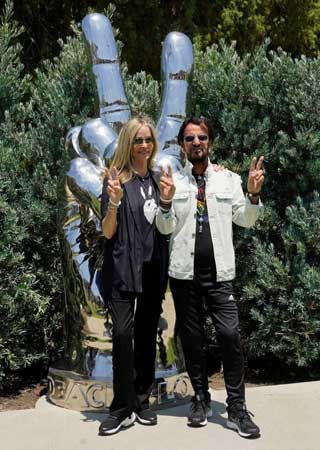 At midday local time, the drummer led the crowd in chants of his trademark slogan as well as being serenaded by a chorus of happy birthday. Sir Ringo launched the event in 2008 and the 2021 running included gatherings around the world in countries such as Argentina, Japan, Italy, Peru, Spain and the UK. The Liverpool-born rock star, who held a smaller than usual gathering due to the pandemic, said he was proud of the day’s growth. He told the PA news agency: “It’s what I do, it’s what I do – peace and love. It’s growing and I feel like it’s the pebble in the ocean, you drop it and the waves go out and out and out. “From 2008, when we did it first time, there was a hundred people just on the street in Chicago and now look at you crowd here and around the world. We have so far 30 countries celebrate peace and love at noon. So it can’t be bad.” Sir Ringo, who was accompanied by his wife of 40 years, Barbara Bach, also revealed Sir Paul McCartney had been in touch with his well-wishes. “He just called me, we still say ‘hi’ to each other,” he said. Sir Ringo quipped: “I’m still waiting for the gift.” In his public birthday message, Sir Paul, 79, tweeted: “Happiest of birthdays to my lovely mate @ringostarrmusic… the drum beat of my life! Love, Paul.”