Fourth Covid strike is upon us, warns PM 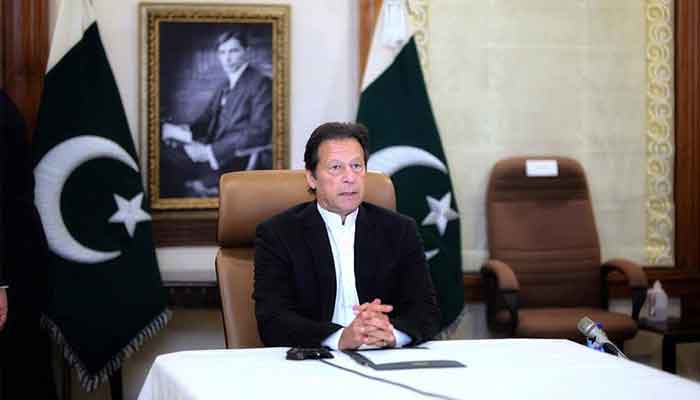 Prime Minister Imran Khan has appealed to the nation to strictly follow the standard operating procedures (SOPs), including wearing of face masks, to protect themselves from coronavirus.

In his televised remarks on the coronavirus situation in the country on Thursday, the prime minister said that an upward trend in coronavirus cases is being witnessed these days.

The prime minister said wearing face masks at crowded and closed places is the simplest way to protect oneself from the pandemic. He said the Indian Covid variant is currently the biggest issue for the entire world, including Pakistan.

Imran Khan urged the general public to adhere to the preventative measures on the occasion of Eid ul Adha to stay safe. He also called upon people to get vaccinated at the earliest.

The Prime Minister said the government does not want to impose lockdown as it would greatly affect the underprivileged segment of society and the country’s economy as well. He said today the situation in Pakistan regarding coronavirus is far better due to the efforts of NCOC and support by the public.

Meanwhile, Leader of the Opposition in Sindh Assembly and PTI MPA Haleem Adil Sheikh called on Prime Minister Imran Khan in Islamabad on Thursday. Political situation of Sindh province and administrative issues of the party came under discussion during the meeting.

Fearing the start of the 4th wave of coronavirus pandemic in current month, head of National Command and Operation Centre (NCOC) Asad Umar has said that the government would not impose complete lockdown during this wave.

Addressing the oath taking ceremony of newly appointed members of National Youth Council (NYC) on Thursday, Asad Umar said that during the past waves of coronavirus, the government’s strategy to handle the pandemic and overcome its after-effects had been very successful and the country was placed among the best three performing countries by the Economist’s Normalcy Index for handling it.

The minister urged the people to keep on following the standard operating procedure (SoPs) and vaccinate themselves to cope with the 4th wave in an effective manner. He, however, added that in case the ratio of positive cases goes up, the government would opt for smart lockdown as was done during the past phases.

The minister said that NCOC through a letter informed the Kashmir Election Commission about violation of coronavirus SOPs during ongoing election campaigns.

Separately, expressing its concern over the increasing number of Covid-19 cases in the country, the NCOC directed the provinces to ensure strict implementation of the coronavirus Standard Operating Procedures (SOPs) on Eid-ul-Azha.

The NCOC, which met with Planning Minister Asad Umar in the chair, expressed its concern as the national tally of active Covid cases surged past the 34,000 mark on the back of more than 1,500 new cases registered during the last 24 hours, the highest single-day tally Since June 20.

The NCOC had confirmed the presence of different variants of the coronavirus, including the delta (Indian), beta (South African) and alpha (UK) variants, in Pakistan and detection of their cases in May and June. “We are sharing the UK’s genomics expertise with Pakistan, Brazil, Ethiopia, Kenya, Nigeria, Singapore and the Africa Centre for Disease Control and Prevention, boosting disease surveillance and helping countries identify, track and respond to Covid variants, which are of concern globally.”

The NCOC had already issued special instructions for Eidul Azha, which will be celebrated in the third week of this month. The meeting also took stock of other measures aimed at stemming the spread of the disease, including the closure of the country’s western border.

The NCOC said that the national positivity ratio has also surged to 3.27 percent. Among the active cases, it said, 2,187 patients were admitted to various Covid-dedicated healthcare facilities of the country, including 1,941 in critical condition. It added that 197 patients were on ventilators.

Another 24 people lost their lives to Covid-19 in the country in the last 24 hours, according to the latest statistics issued by the National Command and Operation Centre (NCOC) on Thursday.

The NCOC stats revealed that 1,683 people tested positive for coronavirus after 50,531 tests were taken in the last 24 hours. The country’s positivity rate currently stands at 3.33%, with the number of daily cases gradually going up again. The active number of cases is 34,531.

So far, 910,609 people have recovered across Pakistan, making it a significant count. There is no patient on the vent in Balochistan, AJK and GB. The total number of deaths has reached 22,493, while the total number of cases stands at 967,633.

The coronavirus positivity ratio in the metropolis failed to drop below 10%, Sindh Health Department said, as the ratio hit 10.71% on Thursday. The health department said 3,888 Covid-19 cases were recorded in the first week of July; 80 people succumbed to the virus in the metropolis, while 36,296 tests were conducted.