* Nawaz Sharif will ‘fight every fight’ for Kashmiris: Maryam Nawaz 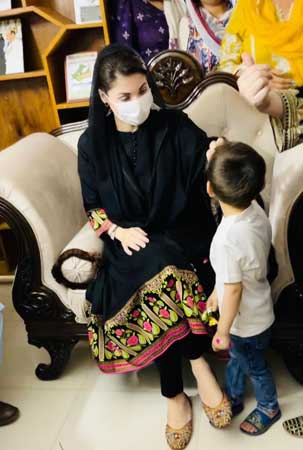 Maryam reminded the gathering that she was a Kashmiri with Kashmiri blood in her veins.

She said Pakistan stands in solidarity with Kashmiris on both sides of the divide.

The PML-N vice president said that the “son of Kashmir”, Muhammad Nawaz Sharif, will “fight every fight” for Kashmiris.

Maryam went on to refer to a video in which there were threats to “smash” her, and she said her father called her and expressed his concern for her safety, but at the same time, said that she should go to Kashmir.

“You have nothing to fear from Kashmiris.”

She paid tribute to AJK Prime Minister Raja Farooq Haider and all the workers of the PML-N, who despite attempts to “steal the election”, have “stood tall in defiance like a mountain”.

She said she will shed light on why when Nawaz Sharif was prime minister, the Indian prime minister came to Pakistan, and why when Imran Khan “came to power after stealing your votes”, the Indian government had the audacity to change the status of Kashmir.

“Are 220 million people looking to you for this? For you to go barter off Kashmir and for you to return and say something like that?” she asked the premier.

She said that PM Imran Khan “can only shed tears over how the Indian prime minister does not receive his phone calls, or how the US president does not extend an invitation to him for a visit”.

Maryam asked what had happened to the government’s plan of observing a two-minute silence every week for occupied Kashmir over its autonomous status having been illegally stripped by India, which continues to keep the area under siege.

“That two minute silence is seen nowhere and instead you have been absolutely silent on the issue since,” she said to the prime minister.

Reminding people of the Daska by-election, she said every party worker now knows “how to stop the theft of votes”.

“He who stole the election back in 2018, still needs to employ such tactics three years down the line,” Maryam said.

Moving on to speak about the Gilgit-Baltistan election, where seven of the party members emerged as turncoats, she said that “despite being electables and winning horses, they all lost”. “PML-N may not have won, but your turncoats lost too.”

Rejecting the impression she said had been put forth by the government, that the PML-N is struggling to find applicants for the election, she said that the party had received at least 10 and as many as 20 applications from each district.