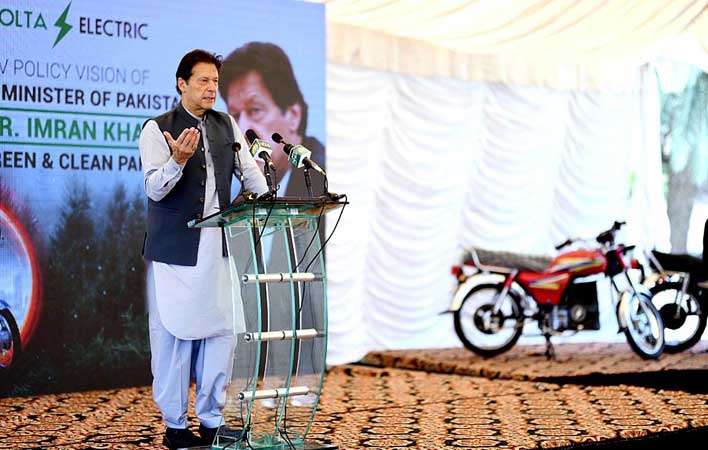 Prime Minister Imran Khan has said that the government has given a new roadmap to protect the future generations from global warming, encourage wealth creation and enhance tax collection.

The prime minister said this while addressing a ceremony in connection with the launch of Pakistan’s first environment friendly electric bike on Thursday.

Imran Khan said, “Our electric vehicle policy is part of the government’s Clean and Green Initiative.” Terming the manufacturing of electric bikes a futuristic and positive step, he said we have to manufacture electric buses and cars in order to address the issue of pollution in big cities where the pollution level has reached the dangerous levels. In addition, he said, “We are also executing the Ten Billion Tree Tsunami project and preparing master plans for cities to deal with the issue.”

As regards the wealth creation, the prime minister said it will be ensured that auto parts including that of motorcycles and other raw materials are locally manufactured.

He said the local production of products will be ensured in order to bolster our exports to address the issue of balance of payment on a permanent basis. He assured to extend every possible assistance to strengthen the auto sector.

The prime minister said a mineral map is also being prepared which will show how rich the country is rich in natural resources. He said the economy is on the upward trajectory and steps are being taken to ensure sustainable growth.

Alluding to the government’s austerity drive, Imran Khan said we have significantly reduced the expenditures of PM House and PM Secretariat over the last three years. He said our aim is to give confidence to the taxpayers that their money will be spent on their welfare.

In his remarks on the occasion, Minister for Industries and Production Khusro Bakhtiar said a new auto policy will be presented before the cabinet next month for approval. He said the policy will focus on local production of vehicles and make the auto industry export oriented.

He said under the electric vehicle policy, three licenses have already been given whilst licenses for seventeen more manufacturers are in the line. He said the development of charging infrastructure will also be encouraged which will provide job opportunities to the youth. He said Pakistan has a good motorcycle manufacturing industry and it is eyeing their exports to Afghanistan, Central Asian States and Africa.

The e-bike is manufactured by a Pakistani company Jolta Electric and is considered a major step towards electrifying the country’s automobile industry. The e-bike tube available in various models including scooty and sports bike, is energy-efficient and requires low maintenance.