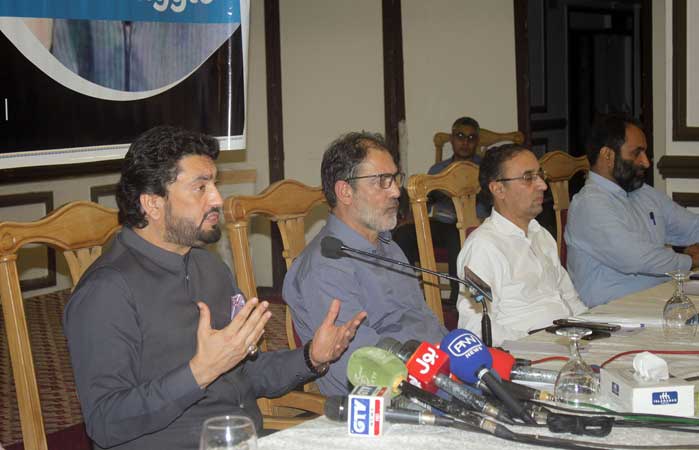 Chairman of the Parliamentary Committee on Kashmir Shehryar Khan Afridi Thursday said that Burhan Muzaffar Wani is an icon of Kashmiri resistance as he relives in every Kashmiri’s heart which cements the resolve of Kashmiris to fight for freedom.

He was addressing a seminar held here on the martyrdom day of Kashmiri freedom fighter Burhan Wani held here under the auspices of Kashmir Institute of International Relations (KIIR).

He said that immediate restoration of article 370 and 35-A was the only way for India which may pave the way for peace in the South Asia region.

Shehryar Khan Afridi said that the nations remember their martyrs as they cement the very foundations of those nations.

He said Burhan Wani had adopted an innovative and brave methodology to spread his message through social media.

He said the sacrifices submitted by Burhan Wani and his comrades had set a new example for future resistance leaders.

He said that the Kashmiris could no longer be misguided and misled due to the campaign run by Burhan Wani and his comrades and India’s fascist face had been exposed to the world.

He said that the new delimitation in Indian Illegally Occupied Jammu and Kashmir was aimed at turning Muslim-majority areas into Hindu-majority areas.

He said that Kashmir is facing a serious threat in wake of demographic changes being made under the ideologic designs of the Hindutva regime.

He said that Pakistan provides new energy to the Kashmiri freedom struggle and it would not shy away from providing all sorts of support to Kashmiris.

He said that Pakistan would not only keep fighting the case of Kashmir but also would keep exposing India’s fascist Hindutva agenda to the world.

He urged the Pakistani and Kashmiri youth to become followers of Burhan Wani and become the voice of Kashmiri freedom struggle. He said that Kashmiri youth should use modern tools of social media to spread imagery and stories of Indian oppression in Indian Illegally Occupied Jammu and Kashmir.

“India wants to gag Kashmiri media so as no tales of Kashmiri sufferings and imagery would not come out of Jammu and Kashmir. Youth should act as bloggers, vloggers, social media activists and expose the brutal face of India in Jammu and Kashmir to the world,” he said.

Shehryar Afridi said that civil, military leadership and all political parties stand united on the issue of Kashmir and all stand together to reassure their Kashmiri brethren that Pakistan stands by them in their quest for freedom.