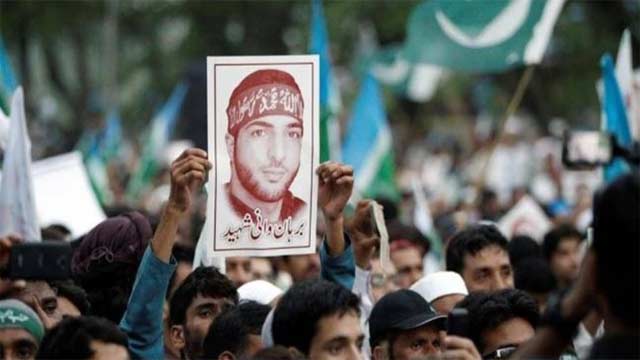 The people of Jammu and Kashmir people living at both sides of the line of control (AJK and IIOJK) and rest of the world Thursday paid glorious tributes to the young martyred hero of the Kashmir freedom struggle Burhan Muzaffar Wani and his companions on his 5th martyrdom anniversary with the renewal of pledge to continue the mission of the young martyred Kashmiri till its accomplishment through the liberation of the motherland from the forced and unlawful Indian occupation.

In Azad Jammu & Kashmir (AJK), mass public rallies and demonstrations besides special prayer meetings for the shaheed Wani and other martyrs in all ten district and tehsil headquarters including the capital city of Muzaffarabad were the hallmark of the fifth martyrdom anniversary of the young Kashmiri freedom fighter.

In IIOJK, there was a complete shutdown strike across the occupied valley to mark the day flowed by anti-India and pro-freedom rallies and demonstrations.

Addressing the rallies, the speakers paid rich tributes to young shaheed Burhan Wani for bringing the Kashmir freedom struggle in the occupied state to the decisive stage through giving the supreme sacrifice of his precious life.

The speakers said that the best way to pay rich tributes to shaheed Wani is to follow his footsteps till the struggle for freedom reaches its logical end.

They said that ongoing indigenous struggle for freedom has reached at the point of no return in the Indian Illegally occupied Jammu & Kashmir (IIOJK) following the daily supreme sacrifices of lives being given by the youth including the street children who are determined to get the motherland freedom from the Indian despotic unlawful rule without taking care of their precious lives, he added.

India should read the writing on the wall and accept the reality about Kashmir’s struggle for freedom. The speakers said that shaheed Burhan Wani infused a new spirit in the Kashmir freedom movement by persuading the young generation of Jammu & Kashmir to take to the street agitation in nook and corner of the occupied valley to get the homeland free from forced and illegal Indian occupation.

They said the supreme sacrifices of the lives by the Kashmiri martyrs including the young shaheed hero of the present time of the Kashmir freedom struggle – Burhan Wani, will not be allowed to go in vain. They said the mission of Shaheed Wani would be continued with full vigor till its accomplishment through the complete success of the freedom movement.

The speakers called upon the international community including the United Nations to exercise their due role for getting the Indian brutalities stopped in IIOJK where the population was fighting for the liberation of the homeland from the forced Indian occupation for the last 74 years.

They underlined that since early peaceful solution of Kashmir issue was the key to the emergence of durable and everlasting peace not only in South Asia but the world over, it was enjoined upon the peace and human rights loving international community to move ahead for ensuring the early settlement of the issue through the grant of the legitimate right of self determination to the people of Jammu & Kashmir – as enshrined in the global commitment through the UN resolutions, they added.

In Mirpur, a rally to observe Shaheed Burhan Wani’s martyrdom anniversary was taken out from the city center under the auspices of various social, political, religious and public representative organizations representing people from all walks of life.

A large number of people hailing from all segments of the civil society including traders, political, social and human rights activists, lawyers, journalists, teachers, students and private and government servants led the rally which culminated at the site of its beginning.

22-year-old Shaheed Burhan Muzaffar Wani had secured the great honour to infuse a new spirit and more vigor among the Kashmiri youth to perpetuate the 72-year-old Kashmir freedom movement through persuading the Kashmiri youth for the freedom struggle through the social media besides to apprise the external world of the exceptional importance of the Kashmiris indigenous struggle for freedom of the motherland from Indian yoke.

He was gunned down by the Indian occupational forces in Bundoora Kokernag area of the occupied valley on July 8 in 2016 in a fake encounter. India had announced Rs One million head-money for shaheed Burhan Muzaffar Wani declaring him the most-wanted.

India’s forced and unlawful occupation of Jammu & Kashmir had never been welcomed by the people of Jammu & Kashmir, which is why waves after waves of freedom movement have been generated in the Indian occupied disputed Himalayan region. The face of the latest movement in the bleeding occupied valley was the martyred youngster Burhan Muzaffar Wani.

It may be recalled that Burhan Wani was seen as the main draw for many young and educated boys in South area of the occupied Kashmir turning into freedom fighters a few months before his martyrdom at the hands of the Indian occupational forces.

He featured in videos and photos posing with weapons and taunting the Indian occupational security forces, which were circulated on Facebook and WatsApp in an attempt to recruit young Kashmiri generation in the freedom struggle.

Shaheed Wani was stated to be an expert in using social media and delivered strong speeches. He was from a well-off family in Tral in south occupied Jammu Kashmir, not far from the place of his martyrdom along with two of his comrades at the hands of the Indian occupying troops.

Shaheed Wani had reportedly joined the Hizbul Mujahideen at the age of 15 after his brother was assaulted by the Indian troops in 2010.

He had been described as a budding cricketer before he turned to the freedom struggle.

India had announced Rs 10 lac reward for information leading to his arrest.

One of his brothers was martyred by the Indian Army in 2015 when he allegedly attempted to meet Burhan in the thick Tral forests of Tral.