Pakistan to lock horns with England in first ODI today 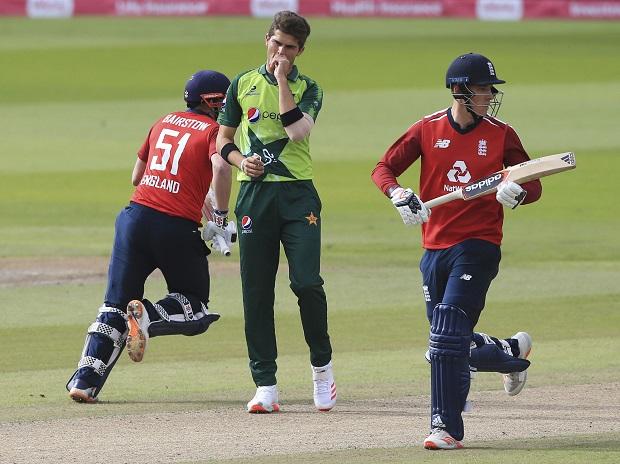 CARDIFF: Pakistan is eyeing the top spot in the ICC Men’s Cricket World Cup Super League as they take on a comparatively weaker England squad today at Sophia Gardens today.

The match starts at 5 pm.

COVID-19 hit the England camp just three days before the ODI series when seven members of their squad tested positive, including three cricketers, forcing them to announce a new squad.

Skipper Babar Azam, however, was resolute to field his best team, showing no mercy at all for the new-look England team when he spoke from Derby.

Pakistan can replace England at the top of the ICC Men’s Cricket World Cup Super League by winning the three-match ODI series.

England are leading with 65 points from 12 matches, winning six matches and losing five while one match was abandoned due to rain. Bangladesh are on second position with five wins and four losses from nine matches and have 50 points.

Meanwhile, Pakistan, who has won four matches (two each against Zimbabwe and South Africa) and lost two from six matches are on the third position with 40 points.

In the three-match series, the winning team will earn 10 points for each win.

If Pakistan win all three matches, they will gain 30 points and rise to the top position with 70 points at the end of the series. Meanwhile, if England win any of the three-match series, they will further consolidate their position at the top spot.

Pakistan will also be aiming to improve their record of playing against England at their own backyard.

Since their inaugural ODI series in England in 1974, Pakistan have lost nine out of the 11 series with their only series win coming in the 1974 series. England on the other hand have won nine series, one series ended in a draw.

Babar, who is the number one ranked batsman in the ICC ODI rankings, will be eager to maintain his top position. Babar is third on the run scorers list in the ICC Super League matches.

The right-handed batter has scored 449 runs at 89.80 in six ICC Super League matches with the help of two centuries and as many half-centuries at a strike rate of 102.98.

Ben Stokes, who has been called to lead England after some of their initially named squad players tested positive for Covid-19, necessitating a whole new squad for the series, will be playing his first home England match for 11 months.

He last featured against Pakistan in the first Test at Old Trafford in August 2020, prior to a spell of compassionate leave. He has played 15 overseas matches since then, three in South Africa and the rest in India.

With nine new caps in England’s makeshift ranks, there will be an element of a lucky dip to the final XI that takes the field.

Stokes admitted on the eve of the game that the squad hasn’t yet managed to meet in person. However, a handful of building blocks are sure to be in place, namely the top-order trio of James Vince, Dawid Malan and Stokes himself.

Pacer Saqib Mahmood seems assured of a role, and so does Matt Parkinson. Phil Salt and Ben Duckett are competing for the second opener’s role.