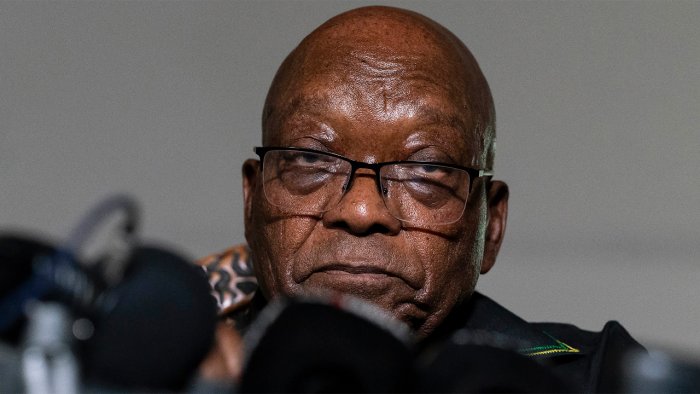 South Africa’s ex-president Jacob Zuma turned himself in to prison late Wednesday to begin serving a 15-month sentence for contempt of court, his foundation said.

In a historic ruling, the Constitutional Court last week handed Zuma a 15-month term for snubbing anti-graft investigators. Police had earlier on Wednesday warned they were prepared to arrest the former president by a midnight deadline to enforce the ruling, unless the top court instructed otherwise. But Zuma decided to make his way to an unnamed prison in his home province of Kwa-Zulu Natal (KZN). “Please be advised that (ex) President Zuma has decided to comply with the incarceration order,” the foundation tweeted. “He is on his way to hand himself into a Correctional Services Facility in KZN,” it said, just minutes before the deadline expired. A convoy of cars believed to be carrying Zuma drove out of his homestead at high speed about 40 minutes before the cut-off time for him to give himself up. Zuma had mounted a last-ditch legal defence and refused to turn himself in by Sunday night as the court ordered. Under the ruling, police were given three days to arrest him if he failed to surrender. He had pleaded with the court for an 11th-hour reprieve.

In an urgent request to the Constitutional Court late Wednesday, Zuma’s lawyers asked it to “direct the suspension of its orders… to prevent our client from being arrested prior to all legal processes being finalised”. Zuma’s first application to halt his arrest was heard on Tuesday but the judgement was reserved until Friday. Separately, he has pleaded with the Constitutional Court to reconsider and rescind its jail order. That challenge will be heard next Monday. Zuma, 79, was forced out of office in 2018 and replaced by Cyril Ramaphosa after a nine-year tenure stained by corruption scandals and the taint of cronyism. Critics nicknamed him the “Teflon president” for his perceived ability to sidestep justice. But his fortunes changed on June 29 when the court issued its damning judgement against him for contempt. Zuma had refused to obey a court order to appear before a commission probing the siphoning off of state assets under his presidency.

Despite his tarnished reputation, the former president carries substantial weight among officials and grassroots members of the ruling African National Congress (ANC). At the weekend he told his supporters that there would be chaos if police “dared” arrest him. The former herdboy was the ANC’s intelligence chief during the armed struggle against apartheid and spent 10 years in jail on notorious Robben Island. Despite its internal tensions, the ANC said it would not interfere with the judiciary processes enveloping Zuma. Party spokesman Pule Made told reporters earlier that “we respect the independence of the judiciary”. Zuma has also been accused of involvement in a bribery affair dating back more than 20 years. He faces 16 charges of fraud, graft and racketeering relating to a 1999 purchase of fighter jets, patrol boats and military gear from five European arms firms for 30 billion rand, then the equivalent of nearly $5 billion.