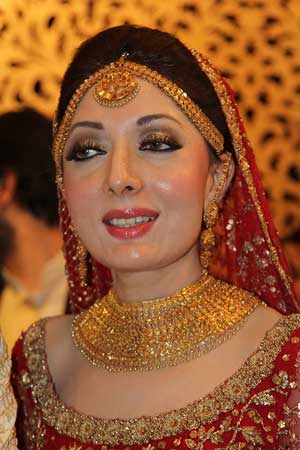 Sharmila Faruqui, a Pakistan Peoples Party leader, has spoken up in favour of women actors who attended the 5th HUM Style Awards.

“Let them be,” she said. “Stop judging women for their choice of clothes, they are adults.”

Sharmila shared a collage of Alizeh Shah, Mashal and Amar Khan, along with a screenshot of actor Bilal Qureshi’s Instagram story. Bilal was one of the first celebrities to express his disappointment over “revealing” outfits.

“No one should be commenting on their choice of attire negatively, it’s a free world,” Sharmila said.

Sharmila has advised that people, who are spreading negativity, should look within and sort their own frustration out.

Some people posted mean comments about Bushra Ansari after her dance video from a mehndi went viral. They thought the actor, whose sister Sumbul Shahid passed away three months ago, shouldn’t have been enjoying herself. They used the actor’s age to try to shame her for being “happy” too.

Bushra didn’t let criticism affect her, saying that hers is the best age to enjoy life.