Nawaz’s domicile is ‘better’ than mine 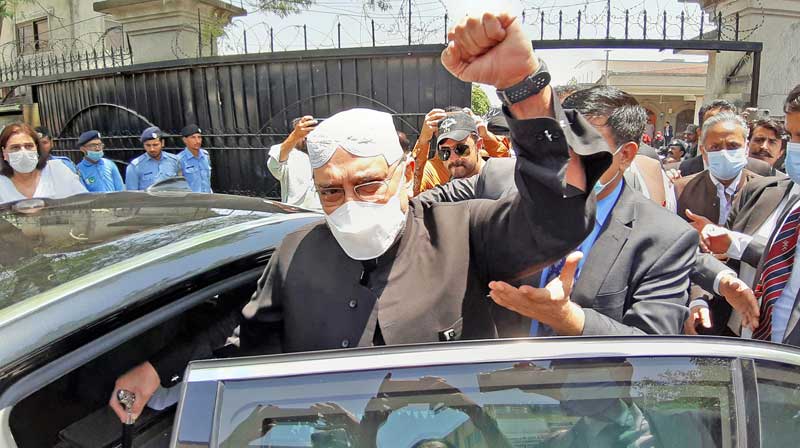 Former president Asif Ali Zardari on Wednesday remarked that PML-N supremo Nawaz Sharif’s domicile is ‘better’ than his, in a veiled assertion that he is being treated unfairly due to his ethnicity, a private TV channel reported.

Speaking outside the Islamabad High Court (IHC), where he appeared for a bail hearing, Zardari was asked to give his opinion on whether the laws are different for him and the PML-N leader. “Mian Sahab’s domicile is better than mine,” he responded.

When asked whether he would advise Nawaz to return to Pakistan, the PPP stalwart said he would not give anyone any advice, but if someone wants to, they can.

Earlier, the IHC had accepted the former president’s bail plea in the New York apartment case, granting him security from arrest till July 28. A division bench comprising IHC Chief Justice Athar Minallah and Justice Aamer Farooq heard the plea. The court accepted the plea against surety bonds of Rs0.5 million till July 28 and issued a notice to NAB.

Before the hearing, Zardari’s counsel had requested the court to allow the vehicle of the former president to enter the court’s premises on medical and security grounds.

A day earlier, the IHC had rejected a request to hear the pre-arrest bail plea in Zardari’s absence. Zardari’s counsel, Farooq H Naek had pleaded that the former president couldn’t appear before the court due to health problems and prayed that the court grant him bail in his absence. He had contended that Zardari was under treatment at a private hospital in Karachi.

Responding to the argument, Justice Aamer Farooq had reminded the counsel that the presence of the applicant was necessary in pre-arrest bail cases.

The NAB has opened an investigation into a New York apartment allegedly owned by PPP supremo Asif Ali Zardari. The NAB has informed the former president via a notice that he had not disclosed in Pakistan that he owned an apartment in New York. It also pointed out in the notice that the anti-graft body could not obtain records confirming that any legal sum was sent from Pakistan to buy the flat in New York.

Former president Zardari had on Monday approached the Islamabad High Court (IHC) for interim bail in the NAB inquiry pertaining to apartment in New York. The petition was filed through Zardari’s counsel Farook H. Naek Advocate in which Director General NAB Rawalpindi and other have been named as respondents.

The petition said that the NAB had served a call up notice to former president on June 15, regarding an inquiry pertaining to apartment at Belaire, 524 East 72nd Street, 37-F Manhattan NYC. The NAB had sent a questionnaire and sought detailed answers till June 24. The petition said that there was a risk of arrest of former president Asif Ali Zardari like past and prayed the court to turn down the call up notice besides granting an interim bail to the petitioner till the final decision of the case.

The former president wrote in the petition that he received NAB’s notice on June 15, and sought time to respond to the notice. Zardari said he had requested for more time so that he could gather information about the property. “There is a history of NAB targeting me,” the former president had stated in the petition. “I am suffering from several ailments and getting treatment from doctors,” he had added.

Federal minister Ali Haider Zaidi had, in 2018, tweeted the property tax bills of a New York apartment allegedly owned by the PPP co-chairperson. The PTI had filed a reference with the Election Commission of Pakistan (ECP) against Zardari for allegedly hiding the property in his nomination papers. The petition had been submitted by PTI’s Khurram Sher Zaman and Firdous Shamim Naqvi had moved the ECP Sindh to take notice of the matter and disqualify Zardari as a member of the National Assembly. The provincial election commissioner had maintained that only the ECP Islamabad could take action over it.

On July 3, Information and Broadcasting Minister Fawad Chaudhry had said that NAB had recovered Rs 33 billion in the fake accounts case involving the former president. “With such a recovery, the volume of corruption in the country could be gauged easily as how the past rulers had looted the country and Sindh [in particular],” Fawad wrote on Twitter. “The actual volume of corruption in the fake accounts case was whopping Rs5,000 billion,” he had added.