Only Kashmiris have the right to decide their future: Bilawal Bhutto 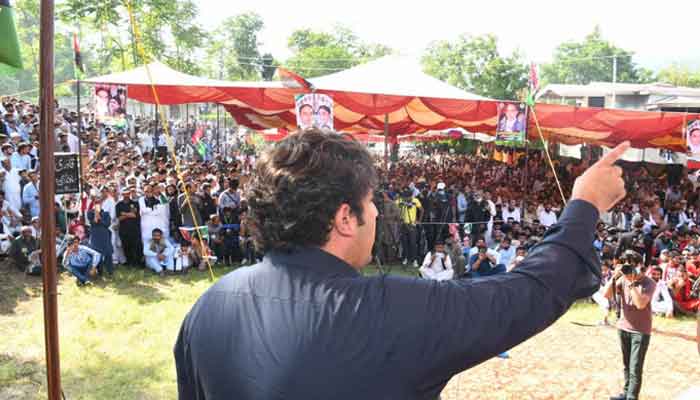 RAWALAKOT: Starting his speech with the ‘Jeeyo Bhutto’ slogan, Pakistan People’s Party Chairman Bilawal Bhutto addressed a massive public gathering at Rawalakot as part of the election campaigns for Azad Jammu and Kashmir.

“We must get this message across to Islamabad that the people of Kashmir will decide their future on their own,” Bilawal said, adding that this was PPP’s policy.

He stated that Shaheed Mohtarma Benazir Bhutto created history by becoming the first female Prime Minister of the Muslim Ummah only with the help of the Kashmiri ‘jayalas’ as they played their part in voting for her.

Bilawal Bhutto Zardari lashed out at the ruling Pakistan Tehreek-i-Insaf (PTI) government, warning that attempts to sabotage party’s efforts to form the government in Azad Jammu and Kashmir (AJK) will be “befittingly responded” by jiyalas.

He further added that all puppets from Bani Gala would be removed, implying the removal of the PTI government. “We will not stand the atrocities against the Kashmiris done by the Indian government while Imran Khan stands helpless in the National Assembly,” he said.

“If there is a historic attack on occupied Kashmir, then Imran Khan says what should I do?” Bilawal went on to say, in a barrage of statements condemning the prime minister.

Stressing on the significance of these elections, he underlined the need for Kashmiris to deliver a message to both sides of the border by placing their vote, emphasizing on the slogan ‘Kashmir pe Sauda Na Manzoor’.

The chairman said the government must compete the PPP with the power of vote, warning if he orders the jiyalas to hit back and reciprocate to the attacks, “The government would be completely razed down to the ground”.

“Go from door to door and tell those who have ever chanted the slogan of Jiye Bhutto […] that we have set out to accomplish the mission of Shaheed Benazir Bhutto and Bilawal and PPP need you [back].

“Make our jiyala the prime minister and you will first and foremost see an increase in salaries,” Bilawal said.

He urged the masses to recognise the reality of their ‘PM’ who took U-turns and made false promises. He added that the premier promised 5 million houses under the new schemes but faulted on his promises as soon as he came into power.

He further added that Islamabad and New Delhi both will have to surrender to the rights of the Kashmiris, adding that Kashmir needs to save itself from this incompetent government.

Hitting out at the economic policies of the Pakistan Tehreek-i-Insaf (PTI) government, the PPP chairman said the entire country was in deep financial crisis due to the ‘selected’ prime minister’s policies.

Talking about the immense inflation in the country, Bilawal Bhutto stated that PPP’s government tackled with the rising prices in the form of the Benazir Income Support Programme (BISP) and a 120 percent increase in salaries and pensions as compared to the incumbent government that has failed to solve the woes of the population since three years.

He added that a 175 percent increase in military salaries was seen in their tenure and the people would, again, see an increase in salaries and pensions after the elections of 25 July.

The PPP Chairman criticised Imran Khan’s narrative of not giving bases to the US saying that there are already no operating bases in Pakistan. PPP, on the other hand, in its tenure shut down many bases and it was the initiative of their government, he said.

Bhutto said it was the PPP government under which the USA had to seek an apology from Pakistan.

Referring to the brand of politics of PML-N, PPP chairman said earlier the party Vice President Maryam Nawaz would insist on ‘Do or Die’ in her struggle against the ‘establishment’. “But now that stress on ‘Do or Die’ has vanished, and she is desperate to strike a ‘deal’ with those very people against whom she had waged a struggle,” he said, and made it clear that PPP would not be striking a deal.