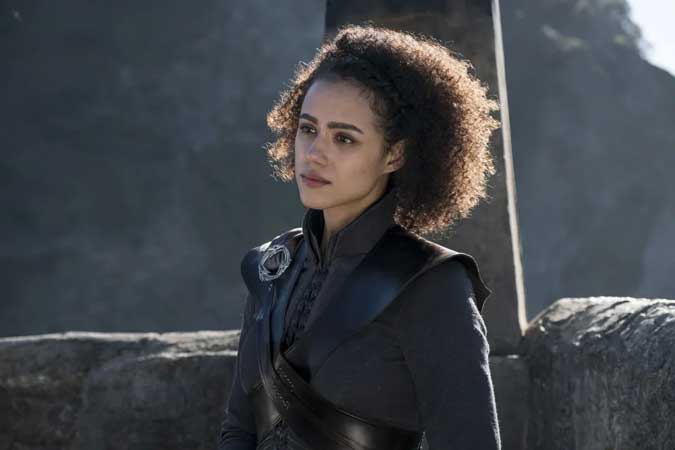 Game of Thrones star Nathalie Emmanuel has spoken out about her character Missandei’s controversial death.

In the final season of the long-running fantasy franchise, Missandei – the right-hand woman of Emilia Clarke’s Daenerys Targaryen – met her death at the hands of Cersei Lannister (Lena Headey).

Her death held particular resonance as one of the few characters on the entire series that was a person of colour.

Speaking about the scenes, Emmanuel has now spoken out, and told Vogue: “When I learned that Missandei was going to die, I knew that, as the only woman of colour on the show, I knew that people would feel the loss of her, because she’s also just a really kind, good character.

“I was not anticipating, I guess, the size of the reaction that happened. I think that really sparked a conversation about, when we make these shows in the future, when we are casting these shows, do we just have to have the one person – is there space for more of us?

Instructing warrior The Mountain to behead Missandei in front of Daenerys and her army at King’s Landing, Missandei died by screaming the word “Dracarys!” which means fire.

The senseless murder sparked a war that saw the city burned to the ground.

Once considered a good and fair queen, Daenerys released her dragons on King’s Landing, burning everyone in sight – including the innocent.

Following her monumental death on Game of Thrones, Emmanuel’s career has continued to soar – and she’s now starring in the new Fast and Furious film.

While the main Game of Thrones series is now over, a number of spin-off series have now been given the go-ahead.

The first, House of the Dragon, is based around the Targaryen dynasty and is set 300 years before the events of the main show. It’s currently being filmed in London and is due for release next year.