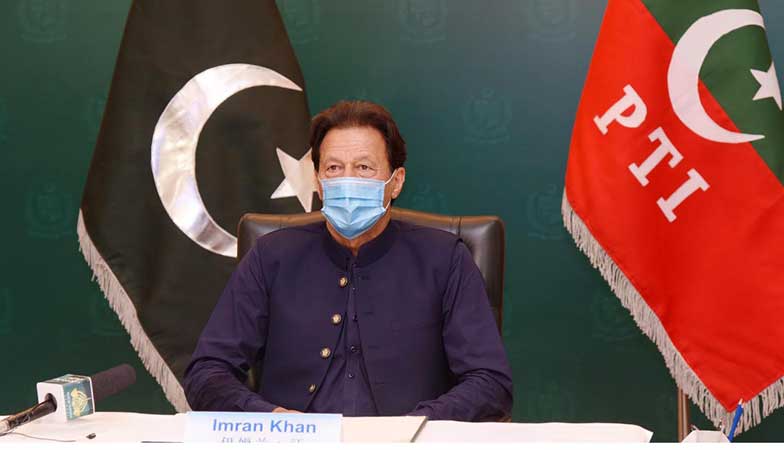 Prime Minister Imran Khan Tuesday said in an era of complex and profound changes at global and regional levels, ‘all-weather strategic cooperative partnership’ between Pakistan and China remains a strong anchor of peace, progress and prosperity.

Addressing the “CPC and World Political Parties Summit” virtually to mark the 100th anniversary of founding of Communist Party of China (CPC), he reiterated Pakistan’s support to China’s efforts for safeguarding the world peace, contribution for global development, and preserving the international order.

In the wake of emerging global and regional environment, the prime minister said Pakistan has recalibrated its priorities from geo-politics to geo-economics. “China-Pakistan Economic Corridor (CPEC), the flagship project of BRI (Belt and Road Initiative), complements Pakistan’s renewed efforts of this geo-economic shift with emphasis on economic integration and regional connectivity,” he added.

The summit was chaired by CPC General Secretary and President Xi Jinping, and attended by more than 500 political parties and over 10,000 political workers/representatives from various parts of the world. About 21 world leaders also joined the summit.

The prime minister said the abiding friendship with China and the CPEC complemented the vision of peace for themselves and for others, and shared prosperity and common development for the region and the world. “Pakistan and China are iron brothers. We support each other on issues of our respective core interests,” he added.

The prime minister, who is also Chairman of Pakistan Tehreek-e-Insaaf (PTI), further said that the year also marked 70th anniversary of establishment of diplomatic relations between Pakistan and China. “Our two nations are celebrating this historic milestone in a befitting manner. I am confident that the year 2021 would provide new vigour and vitality to our time-tested friendship,” he observed.

In the virtual summit themed ‘For the People’s Well-being: Responsibility of Political Parties,” the prime minister said the CPC’s mission of ‘Great Rejuvenation of the Chinese Nation’ and the PTI’s vision of a ‘Naya Pakistan’ reflect the respective aspirations of the people of the two countries. “Our two parties also share the spirit of struggle, commitment and fortitude,” he added.

He stressed upon joining hands to advance the noble goals of peace and development, welfare of peoples, and building ‘community of shared future for all mankind’. “Our people deserve no less. Let’s help them fulfill their aspirations in fullest measure,” he emphasized.

The prime minister opined that the discourse in the summit would shed new light on the role of political parties in advancing the well-being of people. He also extended heartfelt felicitations, on behalf of the government and the people of Pakistan, to President Xi Jinping and the Chinese people on the 100th anniversary of the Communist Party of China.

Founding of the CPC in 1921, he said, was a seminal event in the world history. The vision of the CPC leadership ignited the spirit of the Chinese nation and encouraged them to wage an epic struggle for liberation from foreign occupation, he observed. The prime minister said Chairman Mao Zedong, and subsequently Deng Xiaoping, guided the Chinese people in reclaiming national dignity and China’s rightful place in the world. “For decades, the CPC’s spirit instilled new vigour and hope beyond China’s borders. It inspired peoples of colonized nations and contributed to the end of colonial suppression. The CPC’s astonishing success rested in the people-centric approach of its development philosophy,” he said.

“The CPC’s achievements of all-round national development, poverty alleviation, anti-corruption, and nation-building, are truly remarkable,” he said, adding the CPC continued to command deep love, loyalty and devotion of the Chinese people.

The prime minister said President Xi’s visionary leadership played a pivotal role in China’s transformation and continued rise. His people-centric philosophy had made a critical difference as China had eliminated extreme poverty, achieved the goal of building a ‘moderately prosperous society’, and landed on the Mars, he added.

Imran Khan further appreciated President Xi’s vision of shared prosperity, through BRI, which made a major impact on global sustainable development, thus proving his credentials as a global statesman. Under President Xi’s stewardship, he added, China achieved major success in the ‘people’s war’ against the COVID-19 pandemic. President Xi’s declaration of making the Covid-19 vaccines a global public good was reflective of his sagacity, compassion and fairness, he observed.