Talks only with Baloch insurgents not ‘linked’ to India: govt 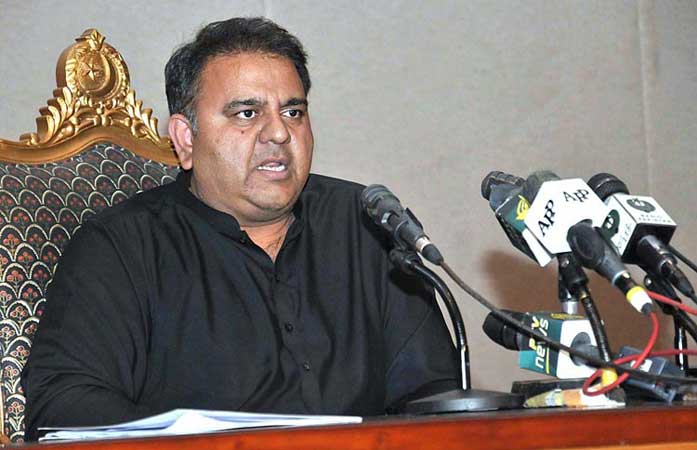 Federal Minister for Information and Broadcasting Chaudhry Fawad Hussain on Tuesday said that work has been initiated on a plan to hold talks with disgruntled nationalist leaders of Balochistan.

“However, there will be no parleys with those who have contacts with India and are involved in subversive activities,” Fawad said while briefing media persons about the decisions taken in federal cabinet meeting, chaired by Prime Minister Imran Khan. He expressed the optimism that Balochistan will soon emerge as a centre of peace and said it will be a big boost for the China-Pakistani Economic Corridor as well.

The information minister said police and security agencies had the biggest achievement with arrest of culprits of Johar Town blast since busting of terror network run by Indian Navy officer Kulbhushan Jadhav. He said the federal cabinet lauded the prompt action by the police and other law enforcement agencies to bust big Indian terror network by arresting the culprits involved in Johar Town blast. In the next few weeks, details about this nexus would be shared with the media, he said.

The minister said that the security institutions also broke down the Indian terrorist network in Balochistan and added that many involved in the subversive activities have been identified. He expressed the hope that the law and order situation in Balochistan will further improve in the near future.

Responding to the questions of media persons, Fawad said the agenda for holding negotiations with Baloch disgruntled elements is being devised in consultation with the relevant institutions.

He said that Prime Minister Imran Khan has again invited the opposition leadership to cooperate with the government in introducing election reforms to bring about transparency in the election process and to end the rigging charges once for all. Unfortunately, opposition is so far not ready to join the government in its endeavours to ensure non-controversial elections, he added.

Regarding opposition’s apprehensions about upcoming Azad Jammu and Kashmir elections, he said it is building a narrative of rigging in AJK elections without any cogent reason. He pointed out that only eight candidates are currently contesting AJK elections on PPP ticket and almost same is the position of PML-N, which has roughly 12 to 14 candidates and both parties are destined to lose the elections. They were building rigging narrative as a pre-emptive measure to avoid embarrassment of losing the elections, he remarked.

Responding to another query, he said Khursheed Ahmed Shah Committee had doled out hundreds of jobs to party workers without devising any mechanism, which destroyed government institutions. He said Khursheed Shah committee appointed people on daily wages, regularized their services and afterwards awarded them pension, and ultimately the people will have to pay their salaries. The PPP has replicated the same devastating policy in Sindh resultantly destroying the provincial institutions also, he said. “It is very easy for me to appoint a vast majority of youth of my constituency for becoming a formidable electable but this would destroy the government institutions,” he added.

About possible influx of Afghan refugees in Pakistan, he said if situation in Afghanistan worsened, Pakistan will have to accommodate huge number of refugees. Fawad said that refugee camps would be set up along with the border region but managing the divided families would be a challenge. From out of 2,700 km long border with Afghanistan, over 90 percent border has already been fenced and efforts are underway to start proper mechanism for entry and exit at border crossings, he added.