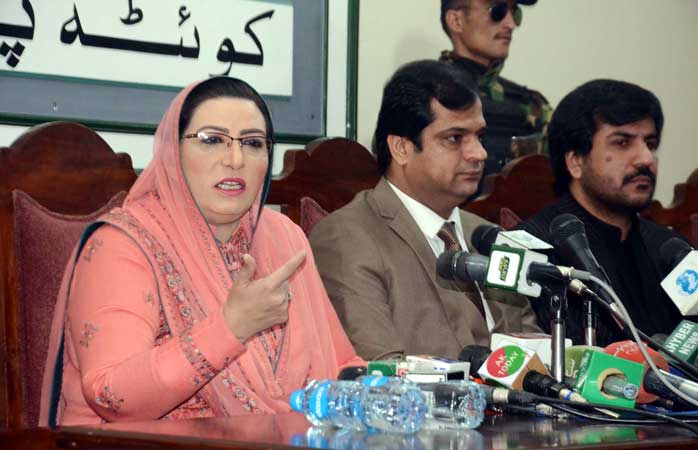 Special Assistant to Chief Minister Punjab Dr Firdous Ashiq Awan on Tuesday said that Pakistan Muslim League-Nawaz leadership wanted to make a deal for protecting their personal agendas but the people of Pakistan had rejected them as they spit poison against national interests while sitting abroad.

Addressing a press conference along with Punjab Minister for Provincial Disaster Management Authority (PDMA) Khalid Mehmood here at PDMA head office, said, if the PML-N leadership wanted to make a deal, they first had to come back to the country and face the cases pending in courts, only then the people of the country would accept them.

The rift between Maryam Nawaz and Shehbaz Sharif had been surfaced during party ticket distribution process for Azad Jammu and Kashmir elections, she maintained.

She said that Pakistan Democratic Movement (PDM)’s agenda to push the country into darkness had failed as people did not allow them to spoil the country’s progress and prosperity.

She said that PDMA’s team had effectively responded to national emergencies including flood, COVID-19 and locust by maintaining proper crisis management strategy and supply chain, adding that practical steps were being taken to develop it as per standards of international emergency response organizations so that it could provide a sense of relief to people during emergencies.

The use of zigzag technology to reduce the environment pollution particularly smog was another milestone of PDMA, she added. Regarding Supreme Court’s decision on Local Government, Dr Firdous said the government would fully implement the Supreme Court’s verdict as a summary to comply with SC’s decision has been sent to the CM Punjab but the government at the same time had also filed a review petition in SC pertaining to this matter, adding the government hoped that the proceedings on review petition would soon be started.

The SACM said the government had amended the Local Government Act after which the Mayor Lahore would be elected directly by the Lahorites instead of only 274 union councils’ representatives adding that the Local Government Act would help in empowering the people and provide an opportunity to able candidates for taking part in electoral process. It was a manifesto of the PTI government to ensure transfer of power at the lowest level, she asserted.

Addressing on the occasion, PDMA Punjab Minister Khalid Mehmood said the authority had played a significant role to cope with emergencies like COVID-19 and locust, adding that comprehensive steps were being taken to bring improvement in the functions of PDMA under which the volunteers were trained by the PDMA at district level.

In case of emergency, these volunteers would respond as a first emergency force, he said and added that data of flood affected people and prospects had also been compiled. He said the government had also allocated funds of about Rs 2 billion in financial year 2021-22 for establishment of PDMA complex in which a training school besides other facilities would be ensured.The minister said that there was no warehouse in district headquarters to save the material and other gadgets of PDMA but now the warehouses would be established in districts.