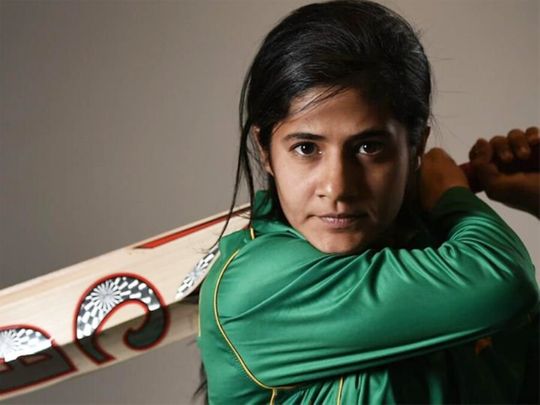 She spoke about the recent T20 matches, the team’s performance, and the upcoming ODI matches in a YouTube video uploaded by Pakistan Cricket Board on Tuesday.

She said the upcoming matches will help them stop making repeated mistakes.

“I think the five-match series is really good. We’ll get to learn a lot and we’ll get a lot of help in making a combination.”

The Pakistan Women team is touring West Indies since last month. The team recently played three T20’s against the West Indies Women team and is now scheduled to play 5 ODIs from July 7.

Khan said the team was disappointed at losing the T20 series as they had worked really hard.

The team’s batting and fielding unit failed to stand out in the T20 series. However, the captain praised the bowling unit for their progressive performance throughout the tournament.

She said the batting and fielding units lacked due to a little ‘pressure handling’ issue.

Khan believes if they had more runs they could have won the last matches.

“We’ll try when we go into the ODI, we take what we’ve learned – to stay calm in pressure situations and better read situations – and start with a new momentum.”

The all-rounder is confident about improving the team’s batting. She says the team has been working hard and hopes they’ll be able to apply what they’ve learned in the recent T20s to the upcoming matches.

The field conditions at Coolidge Cricket Stadium, the venue for the first two cricket matches are more or less the same, according to the captain.

The match between Pakistan and West Indies women will take place on 7 July at Coolidge Cricket Stadium, Antigua.