LONDON: Matteo Berrettini stepped up his bid to join a select band of players to complete the Queen’s Club-Wimbledon double in the same year with a fluent 6-4 6-3 6-1 fourth round win over All England Club debutant Ilya Ivashka on Monday.The roll call of players who have completed the London double includes John McEnroe, Boris Becker, Pete Sampras, Rafa Nadal and Andy Murray and, after becoming the first Italian man in 23 years to reach the Wimbledon quarter-finals, Berrettini looks confident in his attempt to join that illustrious group. The seventh seed broke early in each of the sets and, although Ivashka produced a mini recovery to claw back from 5-1 down in the second, the result never seemed to be in doubt on a sun-soaked Court 12. A sanguine drop shot from Berrettini ended the 79th-ranked Belarusian’s challenge. 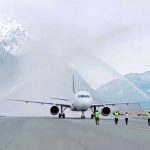