* PPP chief says rulers whether in Muzaffarabad or Islamabad are ‘cowards’ 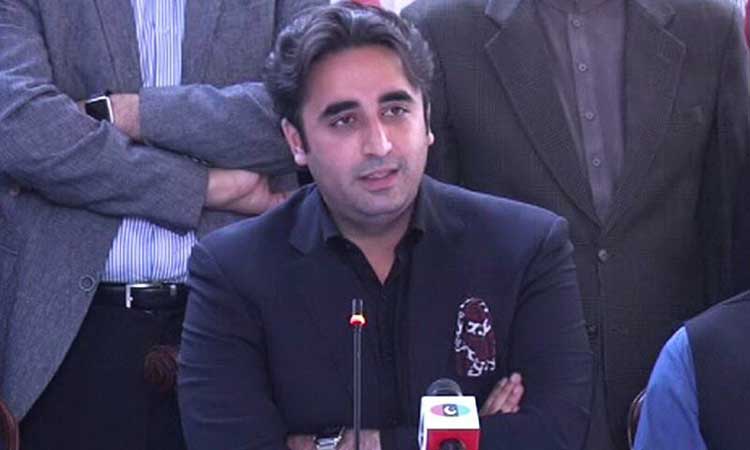 PPP Chairman Bilawal Bhutto-Zardari on Monday took a jibe at the PTI-led government as well as PML-N’s regime in Azad Jammu and Kashmir (AJK) and said that rulers whether they are in Muzaffarabad or in the federal government are ‘cowards’, a private TV channel reported.

“PPP is the only party in Pakistan which has the support of the poor masses,” Bilawal said while addressing a rally in Nakyal, Azad Kashmir, as part of his party’s election campaign in the region. “PTI-government, as well as other parties, have no reason to fear the PPP. If you have to compete against us, then you should do it through the process of voting and election,” he said, to the government and other rival parties.

Further criticising the PTI government, the PPP chairman said that Pakistan has been unlucky in the sense that it has a ‘puppet of a prime minister’ imposed on it, adding that when India’s Modi attacks Kashmir, the Pakistani prime minister says he cannot do anything about it.

Bilawal, expressing his confidence, also said that the PPP will form government in AJK with the ‘power of the vote’. “The government and rival parties should know that the PPP has a young chairman,” he said. “You should compete with us on political grounds, but don’t try to fight PPP loyalists,” he added.

Meanwhile, Bilawal said that July 5, 1977, will always be remembered as a black day in the history of Pakistan when the military rebellion under the leadership of dictator General Ziaul Haq made an impudent attack on the democratic aspirations of Pakistani people.

Bilawal said that the democratically elected prime minister supervised the approval of the unanimously adopted constitution of Pakistan. “Late Bhutto laid the foundations of Pakistan’s macro-economy and gave the right of citizenship and passport to every Pakistani. The elected leader had snatched the right of governance from some selected persons and devolved the power to the people and made them powerful,” he added.

The PPP chairman was of the view that July 5, 1977, martial law was the worst attack on the country’s history, the consequences of which Pakistan was still facing after the passage of several decades. “The rebellion sowed the seeds of intolerance, extremism and terrorism in the country and let these negative notions seeped deep in our society,” he added.

Bilawal said that ZAB had united the Muslim Ummah and led the Islamic world through his farsighted political acumen. He said late ZAB confronted two dictators and fought a battle for the rights of the people. “He accepted gallows but refused to budge from his stance. His daughter, Benazir Bhutto, fought bravely against the dictatorship after him,” he said, adding that ZAB’s followers and supporters were made subject to every kind of inhumane torture, including lashes, solitary confinement and hanging.

Bilawal said the war is still going on between democratic and despotic forces. “ZAB had warned that give the power to the people, otherwise everything would be destroyed. These words are true even in today’s conditions as we still are fighting for the survival of democracy in the country,” he said. “ZAB is still alive while those who heaped pain and suffering on him, are part of the trash bin of the history piling curse on their heads for ages to come,” he added.