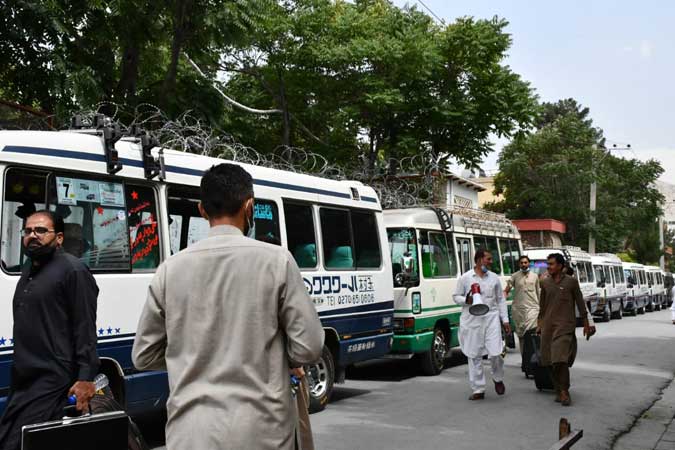 Pakistan has begun repatriation of its 4,000 nationals stranded in Afghanistan due to suspension of flights to Saudi Arabia via Kabul.

Pakistanis would proceed to Saudi Arabia from Kabul airport after the Kingdom banned flights from Pakistan due to Covid-19 months ago.

Thousands of Pakistanis were left stranded at Kabul airport waiting for departure, when Saudi Arabia took measures to halt flights from Afghanistan owing to a surge in coronavirus cases in the war-ravaged country.

The Pakistani embassy in Kabul said on Monday the Ambassador of Pakistan in Kabul and the Embassy of Pakistan have made effective arrangements for around 4,000 Pakistanis stranded in Afghanistan due to closure of flights to Saudi Arabia, for their return to Torkham.

A statement said the repatriation was started in accordance with the Prime Minister’s directions to help Pakistanis abroad.

These Pakistanis were being provided a decent place for temporary stay at the Embassy and were provided food, buses and cash grants for their return to Torkham and travel to their home towns in Pakistan, according to the statement.

The stranded Pakistanis appreciated the Embassy’s efforts while departing for Torkham.

Officials in the Khyber tribal district said on Monday that 480 Afghan students, who had been stuck in Afghanistan due to closure of the Torkham border, have returned to Pakistan.

Despite the closure of the border, the Pakistani authorities allowed Afghan students, studying in Pakistan on Allama Iqbal scholarships, to cross the Torkham border.

The students have been shifted to quarantine centers in Landi Kotal, a major town in Khyber district and Peshawar. Three students were sent back after signs of corona were found, according to health officials who were at the border to check them on arrival.