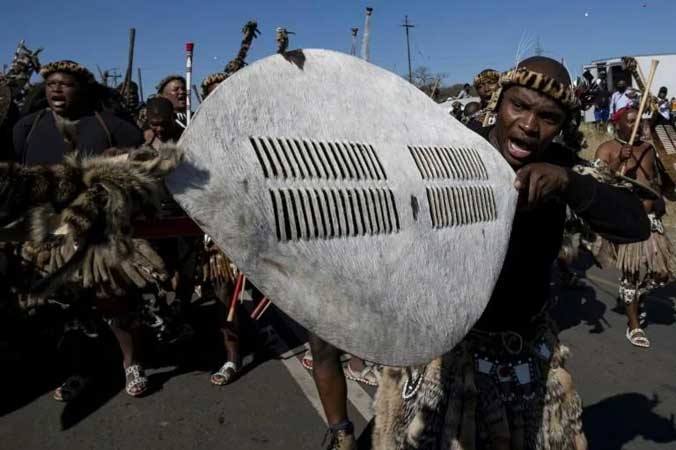 In a case that has left the country agog, South Africa’s police minister on Monday said he was awaiting court instructions on whether to arrest ex-president Jacob Zuma, who has been given a 15-month jail term for contempt.

The country’s top court last week convicted Zuma for contempt and ordered him to turn himself in by end of Sunday to start his sentence. If he failed to do so, the police would be told to arrest him within the following three days.

But Zuma on Friday lodged a last-ditch application to halt execution of the arrest order. The application will be heard in a high court on Tuesday.

“We hope that we will be getting the clarification, because when we were given the instruction there were no other legal activities taking place,” Police Minister Bheki Cele told reporters on Monday.

“The police were given the timeline of Wednesday 12 midnight… we still have got a lot of hours in between the court tomorrow,” he said.

In responding documents to the court, the investigators slammed Zuma’s move as a further bid to jam the judicial machinery.

His application was “a continuation of a pattern of abuse of the court process,” they said. “Courts should not entertain such abuse any longer.”

Zuma, 79, has separately pleaded with the Constitutional Court to reconsider and rescind its order to jail him. That challenge will be heard on July 12.

Zuma’s case has transfixed South Africa, despite a raging coronavirus pandemic that has made it the worst-hit country on the continent.

Supporters have rallied outside Zuma’s rural home at Nkandla in Kwa-Zulu Natal, defying a nationwide ban on all gatherings except for funerals.

Hundreds of followers converged on Sunday, dressed in the regalia of the ruling African National Congress (ANC) party regalia and in traditional Zulu warrior constumes.

Wearing a black shirt embroidered with ANC colours, a maskless Zuma defiantly addressed the crowd before breaking into his signature song, the liberation struggle anthem “Awlethu Mshini Wam,” which translates to ‘Bring me my machine gun.’

Despite the breach of Covid reglations, police did not intervene to disperse the crowd.

Cele said they had decided to act cautiously, in the belief that as many as a hundred of the supporters had firearms, and there was a need to avoid “bloodshed.”

He made a reference to an incident at Marikana in 2012 where police brutally broke up a wildcat strike, killing 34 mine workers — the worst massacre since the end of apartheid in 1994.

A Zulu elder and opposition politician Mangosuthu Buthelezi, 92, lambasted the crowds congregating in support of Zuma in the midst of a pandemic as “the greatest irresponsibility of all” adding what was going on in Nkandla was “treasonous”.

“With all due respect for the sympathy people may have for Mr Zuma’s plight, challenging the state and risking lives is unacceptable,” said Buthelezi.

Speaking from Nkandla on Sunday night, Zuma vowed he would not hand himself to the police by the set deadline because of the pending court applications.

There is “no need for me to go to jail today,” he told reporters, giggling.

“They cannot accept papers and expect me to go to jail,” he said, referring to his legal challenge of the sentence and arrest order.

The defiant politician has repeatedly attacked the judiciary and did not hold back from lashing out again.

“I’m very concerned that South Africa is fast sliding back to apartheid-type rule,” he said.

“I am facing a long detention without trial,” he said. “Sending me to jail during the height of a pandemic, at my age, is the same as sentencing me to death.” afp