‘The Forever Purge’: Is America Finally Catching Up to the ‘Purge’ Movies? 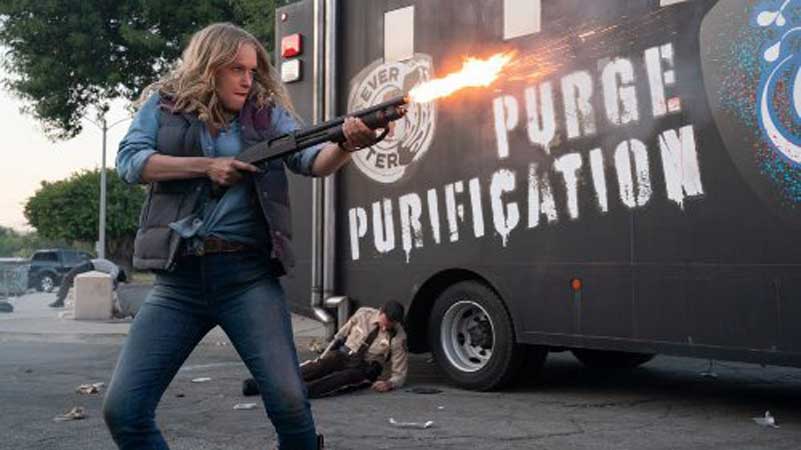 The “Purge” movies started off, in 2013 (we’re coming up on a decade of high-spirited fun!), as a dystopian action fantasy set in a metropolis gone mad. The series has always had a pop political dimension, most of it related to the New Founding Fathers of America, the ominous ruling party that institutes the Purge as a way to let off steam — but, really, as a way to control the masses, who have one night a year in which they can commit any crime, even murder, without legal ramifications. The fact that the Purgers aren’t allowed to touch any NFFA member is the tipoff that this controlled night of anarchy is really the ultimate vicious exercise in rats-in-a-maze obedience. The “Purge” films began as a kinky “Clockwork Orange” knockoff, a teasing comic-book vision of the new angry America’s sociopathic heart. But as the series has gone on, it’s become more explicitly “political,” and in one case — the fourth entry, “The Purge: Election Year” (2016) — the hot-pot sociology connected in a way that went beyond the usual threadbare resonance.

That leads us to “The Forever Purge,” the fifth and latest installment in the series. By now, the notion of a ghoulish exploitation ride rooted in the scary voyeuristic thrill of seeing people slaughter each other for kicks should be wearing out its welcome. Instead, it’s gaining traction. “The Forever Purge” is set in Texas, a place that likes to think of itself as having invented the idea that the law should consist of a man, his firearms, and not much else. Until now, the series has encouraged us to think of the Purge as a city thing: all those residents of highly populated epicenters with their pent-up rage. But the notion of a “Purge” film as a demented cowboy action movie strikes a chord, especially when you toss in the topical Molotov cocktail that “The Forever Purge” is built around.

The movie opens with a couple, Adela (Ana de la Reguera) and Juan (Tenoch Huerta), sneaking across the border from Mexico, and then it cuts to 10 months later in the Texas flatland town of Los Feliz Valley, where the two have found employment at the ritzy sprawling ranch of the Tucker family. Dylan Tucker (Josh Lucas) is a smug rancher with a chip on his shoulder about the undocumented immigrants who work for him. His wife, Harper (Leven Rambin), is pregnant, and his father, the cowboy patriarch Caleb Tucker (Will Patton), sits astride his estate like a throne. These people think they’re ready for the Purge, which lasts from dusk till dawn. Their compound is equipped with metal armor that comes down over every window and door, and the basement is stocked with guns. Meanwhile, Adela and Juan head over to a local security space for immigrants that’s being patrolled by armed guards. It all looks safe. And it is, right up until the morning when the Purge officially ends.

The Purgers have already asked themselves a question that, in its way, is perfectly logical: Why limit the kick of Purging to one night? It makes a hideous kind of sense that the NFFA, in inventing the Purge, has now created a monster. They’ve degraded and maybe destroyed the very idea of the rule of law. Where “The Forever Purge” exerts a genuine timely bite is in the way the Purgers feel fully justified in creating the “Ever After” Purge, as if it’s their right as Americans to do anything within their power to preserve their country for the “real” Americans. “The Forever Purge” presents an extreme scenario (it goes from action movie to zombie movie to “Mad Max” movie), but it plays as a horrific satire of the current mood of “nationalist” intolerance, and of the lawlessness (#StopTheSteal) that’s being invoked in its name. The movie is also shrewd enough to give Will Patton a terrific speech about how, sure, he knows that a wealthy man like himself has exploited the underclass, but the true fraud is that of the NFFA members, who encourage their followers to play at righteous anarchy while the money all goes to them. Sound familiar?

As a satirical demagogic action movie, “The Forever Purge” is blatant, bare-bones, and entertainingly brutal. There’s a progressive message buried in there somewhere; it’s about how Dylan, the condescending liberal racist, sees what his fellow rednecks are now about and changes his ways, coming to respect the humanity of the immigrants who work for him. He has to put himself in their shoes.

Mostly, though, the director, Everardo Valerio Gout, works with a lock-and-load finesse. He keeps the mayhem tense and tight, and he knows how to stage an irresistible scene like one in which our heroes find themselves aboard a police van along with a bellowing Nazi skinhead who can pinpoint each of the weapons being fired at them just by hearing them.