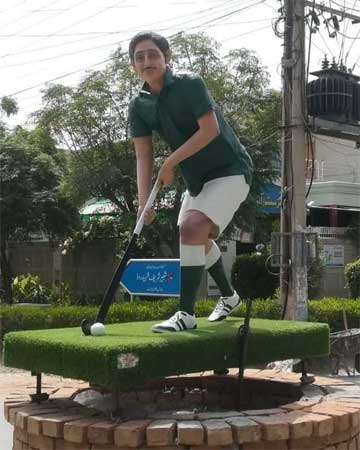 LAHORE: Samiullah Khan, one of the greatest if not the greatest left winger in the history of hockey, has been honoured at his native city of Bahawalpur. His statue was installed at a busy crossing in the cantonment the other day. Popularly known as ‘Flying Horse’ for his electrifying runs down the left flank, Samiullah played for Pakistan from 1973-82. At the FIH World Cups, he was a member of two winning teams: 1978 and 1982. He also won silver from the 1975 World Cup. He appeared in just one Olympics in 1976 where Pakistan won bronze. Pakistan along with a number of other countries had boycotted the 1980 Olympics. He won three Asian Games golds: 1974, 1978 & 1982 (when he was the captain), one Asia Cup gold: 1982 (captain). Samiullah was also an exceptional scorer for a winger. He scored 55 goals in international hockey including 12 in four World Cup appearances.