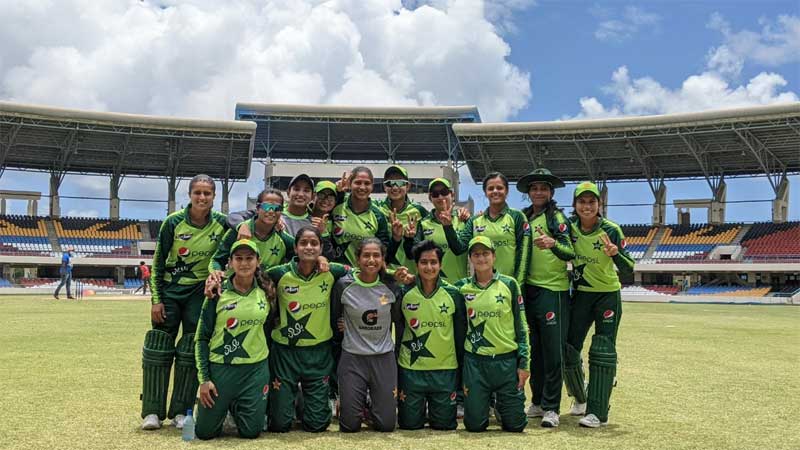 LAHORE: An impressive bowling performance followed by Ayesha Zafar’s unbeaten 53 set an eight-wicket win for Pakistan Women ‘A’ in the third and final T20 against West Indies Women ‘A’ at the Sir Vivian Richards Stadium on Sunday. With the victory, the national women’s ‘A’ team won the three-match series 3-0. Pakistan chased down 100 with ease and comfort with eight balls to spare as right-handed opener Ayesha struck three fours and a six from 57 balls. She also become the highest run-getter of the series with 93 runs from three matches. Pakistan bowlers, once again, bowled with discipline after Rameen Shamim elected to bowl. They bowled a total of 61 dots, with pacer Maham Tariq delivering the most – 18. Maham gave Pakistan their first breakthrough in the fifth over with the wicket of Rashada Williams, who was caught at cover.

Aroob Shah picked up the wickets of Qiana Joseph and Sheneta Grimmond. The 17-year-old leg-spinner finished with two for 13 from three overs. West Indies captain Reniece Boyce top-scored with 42 off 44 balls. She struck four fours. The T20 series is followed by three-match one-day series, which kicks off on 10 July. The first one-day match will be played at Sri Vivian Richards Stadium. The last two matches will be played at Coolidge Cricket Ground on 13 and 16 July.