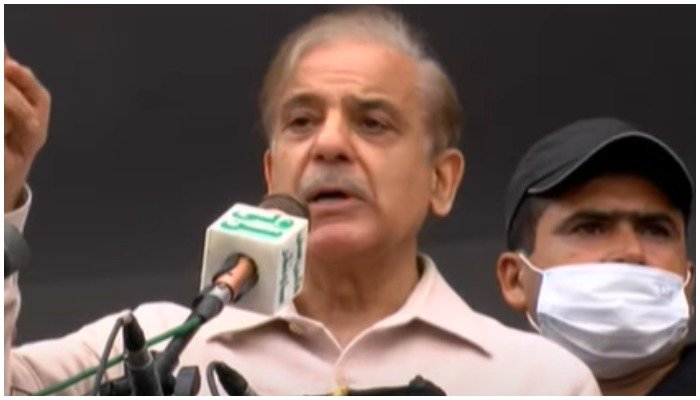 Addressing a gathering of the Pakistan Democratic Movement (PDM) at Grassy Ground in Mingora on Sunday, Shehbaz said that all parties in the anti-government opposition alliance, PDM, are united and on the same page in their aim to oust the incumbent Pakistan Tehreek-e-Insaf (PTI) government.

Taking a jibe at the PTI-led government, Shehbaz said that it has failed to deliver its promise. “Imran Khan had said that he would end corruption from the country within 90 days of coming into power, but nothing happened,” said Shehbaz, adding the seat of the premier remains empty in the Parliament just like the pockets of the masses.

He urged the masses to bring in a revolution against the present government for the rising inflation and corruption in the country. “Imran Khan has destroyed Pakistan’s economy. How would someone sitting in a palace in Bani Gala know the difficulties of common people,” he added. He said that God has blessed Pakistan with every resource but unfortunately, it lacks capable people to make use of these resources for the betterment of the country.

He said that ever since Imran Khan took over, the country has been going through “historical poverty.” Inflation has skyrocketed and Pakistan has never seen such a condition before, he said, adding that despite promising the provision of five million houses for the poor, not a single brick has been laid by the government.

“Imran Khan said he would create 10 million jobs but instead left people unemployed,” he said. “This is certainly not the Pakistan that the Quaid-e-Azam had envisioned.”

Slamming PM Imran on his remarks on nuclear deterrence, the PML-N president said that it is the most crucial defence of Pakistan as the enemy would think many times before acting against the country. “Nuclear capability is out deterrence because the enemy would think many times before harming Pakistan but he (PM Imran) says we do not need it if the Kashmir issue gets resolved,” he added.

Blaming the ruling party for pushing Pakistan towards power outages once again, Shehbaz said that his party’s supreme leader and former prime minister Nawaz Sharif had eliminated the longstanding issue.

“There used to be 20-hour long load-shedding in Pakistan [before PML-N came into power] but Nawaz Sharif resolved the issue through sheer hard work,” he said and added that the former premier inducted 14,000MW electricity in the system.

He said that the country does not even have electricity to cater for its need, there’s no point talking about cheap electricity.