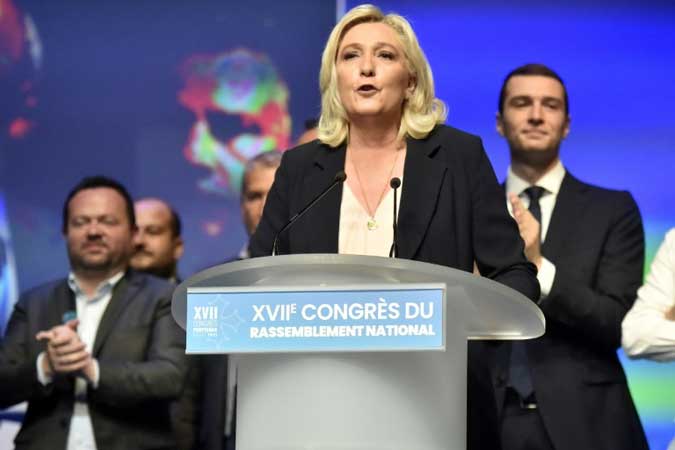 Marine Le Pen won re-election as head of France’s far-right National Rally Sunday at a party congress, where she is seeking new impetus for her 2022 presidential bid after performing badly in regional polls.

The National Rally (RN), which had been tipped for strong gains in last month’s regional elections, was left floundering after failing to win any of the 13 regions in mainland France.

The results raised questions about Le Pen’s strategy of trying to detoxify her party’s brand and position it as a more mainstream right-wing force.

But she faced no challenge for the party leadership, with her quest for a fourth term winning the backing of 98.35 percent of members in an online and postal ballot, RN announced on the second day of its congress in the southern city of Perpignan.

Addressing reporters, the 52-year-old trained lawyer said she felt “extremely combative” about her chances of winning the presidency on her third attempt.

“I have no doubts about what needs to be done for France,” said Le Pen, who will use a keynote address later Sunday to rally party faithful for the 2022 campaign.

Polls show the election coming down to another duel between Le Pen and centrist President Emmanuel Macron, who defeated the anti-immigration candidate handily in the second round of the 2017 vote.

But that scenario is no longer seen as a foregone conclusion.

Macron is also seen as being weakened by the poor performance of his Republic on the Move (LREM) party in the regional election.

LREM, which was founded in 2016, finished last of the big parties, winning just 7 percent of second-round votes in a contest characterised by record low turnout.

Both Le Pen’s and Macron’s parties have downplayed the significance of the regional elections, saying they are a poor predictor of the presidential vote.

The big winners were the traditional parties of the right and left, the Republicans and the Socialists, which were quashed by Macron’s centrist insurgency in 2017 but appear to be regaining ground.

National Rally leaders have rejected suggestions that Le Pen’s strategy of toning down the party’s once strident rhetoric against immigration and the EU have cost it support.

It was Marine Le Pen’s unabashedly extremist father Jean-Marie who sent shockwaves through France in 2002 when he beat a Socialist to land a spot in the run-off of the presidential election against the ultimately victorious Jacques Chirac. Jean-Marie Le Pen was thrown out of the National Front (since renamed the National Rally) in 2015 after a series of anti-Semitic remarks and has loudly complained about its so-called “de-LePenisation”.

In a recent blog post he warned that the RN needed to re-discover its “virility” and refocus on immigration and crime in order to mobilise its base.