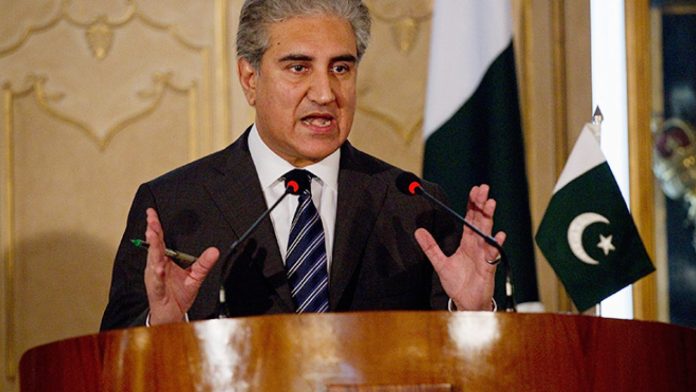 ISLAMABAD: Foreign Minister Shah Mahmood Qureshi on Sunday once again condemned India’s involvement in terrorist activities across Pakistan and said that had the international community taken timely notice of Pakistan’s concerns, Lahore’s Johar Town blast would have not taken place and innocent lives would not have been lost.

Qureshi’s response came after intelligence gathered proved that the mastermind behind the Lahore blast was an Indian citizen, having clear links with his country’s spy agency, RAW.

Speaking to a tv channel, the foreign minister said that he had earlier held a press conference alongside Adviser to the Prime Minister on National Security Moeed Yusuf to express Pakistan’s concerns against India’s involvement in destroying the peace in Pakistan, not only through the provision of arms but also through the financing and training of terrorists.

He said that India has also used Afghan soil to launch attacks in Pakistan from time to time.

“We have said it before too, and now India’s involvement in the Lahore blast has strengthened our suspicions and have proved that whatever concerned we had [about India] were true,” he said. “We still have concrete evidence that India is involved in terror financing.”

Qureshi went on to say that given the clear-cut evidence of India’s involvement in terror financing, it is the duty of the Financial Action Task Force (FATF) to question why India is backing terrorist activities in Pakistan.

He said Pakistan had previously exposed India’s [wrongdoing] and has now done it again.

“To camouflage its atrocities in Kashmir and to take the attention away from its internal problems, India sometimes makes up incidents like the Pulwama attack, launches attacks on Pakistan’s border areas to which Pakistan gives a befitting response, and sometimes it trains terrorists,” he said.

“We would want the international community to know that we had been saying it before too and had provided evidence against India’s involvement in terrorist activities in Pakistan, but a timely notice was not taken regarding the matter,” he stressed.

“Had the international community taken timely notice of Pakistan’s concerns, the Johar Town blast would have not taken place and innocent lives would not have been lost. Several terrorist incidents in Balochistan would not have taken place either.”

He said that Pakistan would once again share evidence [with the international community] and raise its concerns.

“We are facing a challenging situation but, by the grace of Allah, we are a responsible nation. Once we present evidence against India at the FATF and its member countries don’t pay heed, then we would know whether it’s a technical forum or a political one.”

When questioned how Pakistan would move forward after antagonising FATF, Qureshi said that Pakistan has to work towards its self-defence and uproot the menace of money-laundering which has done a lot of damage to Pakistan.

“We have to fight against terror finance and while we have already done a lot, we have to bring those involved to justice,” he said.