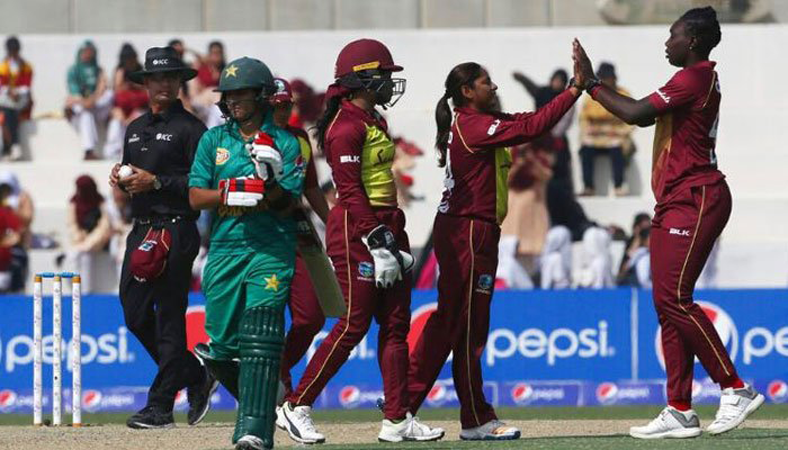 ISLAMABAD: West Indies Women won the second T20I against Pakistan Women by seven runs on DLS method after the play had to be stopped upon the completion of the 18th over with the tourists on 103 for six in their pursuit of 126 on Friday in West Indies. The highlight of the innings was the 42-run partnership between Nida Dar (29 off 36) and Sidra Nawaz (17 off 25) that rescued Pakistan from 25 for three. Aliya Riaz and Fatima Sana were not out on 17 and eight. Pakistan innings had to be paused in the fourth over when West Indies player Chinelle Henry collapsed while fielding at mid-off. Later, Chedean Nation also fell ill and both were rushed to a nearby hospital. Javeria Khan, the Pakistan captain, said: “The thoughts and prayers of the whole Pakistan team are with Chinelle Henry and Chedean Nation. We wish them quick recovery and are hopeful that we will play against them in our next match on Sunday. “Such incidents are tragic and can shake whole dressing rooms. Hats off to the West Indies that they turned up and completed the match despite the grave incident.”

A brilliant display of tight line and length bowling had restricted West Indies to 125 for six after Stafaine Taylor opted to bat after winning the toss. The West Indies openers gathered 34 runs upfront from four overs and looked on course to put a strong partnership until Pakistan captain Javeria Khan introduced 19-year-old Fatima Sana into the attack. The right-arm quick bowled Deandra Dottin (17 off 12) on the first ball. The dismissal played a crucial role in bringing down the hosts scoring rate as it took them nine more overs to post the next 34 runs. Nida Dar, who completed the 100-T20I wicket milestone in the first match, dismissed Hayley Matthews (nine off 16) in the next over – the sixth of the innings.

Fatima struck again in the ninth over – which turned out to be a wicket maiden – with the prized wicket of Stafanie Taylor, the West Indies captain, as West Indies lost three batters in space of nine runs. Fatima bowled 16 dots in her four overs and returned an impressive two for 18. Nida darted 17 dots to return one for 16 from four. A 32-run stand of the fifth wicket between Nation (28 off 33) and Kycia Knight (30 not out off 20) brought West Indies back into the contest. Anam Amin dismissed both batters. The left-arm orthodox returned Knight was named player of the match. The third and final T20I will be played on Sunday at Sir Vivian Richards Stadium.